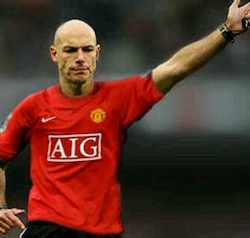 Rightly or wrongly, Howard Webb has been accused of siding with Manchester United on more than one occasion. He awards them penalties freely and this has led to speculations over the years that the world cup final referee is ‘Man u damu’. It is logical that if he were to referee the coming Manchester derby, which is a potential title decider, and Manchester United wins controversially, then his reputation would have been cemented.
Howard Webb has been saved the backlash after Andre Marriner was selected to referee the Manchester derby. Marriner is the ref who was officiating during the Man u, Liverpool clash where Luis Suarez was accused of racially abusing Patrice Evra.
Manchester United are currently on first position with a 3 point difference between them and second placed Manchester City. City can overtake them if they win at Etihad stadium. Mancini’s team had the better of the last derby when they thrashed United 1-6.
© nairobiwire.com
Kenyan Campuses And Their Facebook Fan Pages. < Previous
Sh 100,000 For Night Of A Thousand Laughs VIP Ticket. Next >
Recommended stories you may like: