Ronaldo Tested To The Limit. 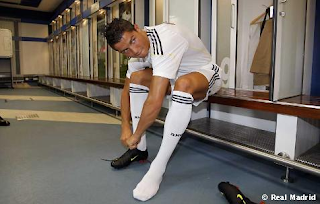 Just before the champions league semi final between Real Madrid and Bayern Munich, Cristiano Ronaldo had his boots stolen from the Bayern Munich locker room.
Spanish newspaper, Marca, reported that several Real Madrid players lost their boots in the dressing room, but the most affected was Ronaldo, who lost 3 pairs. The other players were Mesut Ozil and Karim Benzema. The theft of their trusted footwear, in a German dressing room may be a perfect reason why they lost the match to Bayern Munich and its therefore surprising Mourihno did not use that. The 3 players were particularly not at their best. Real Madrid has already complained to UEFA.
© nairobiwire.com
# Nairobi Tremor.. The morning Twitter Trend. < Previous
Pakistani Baby Born With 6 Legs. Next >
Recommended stories you may like: