Balotelli Involved In Another Car Crash.

Balotelli In An Accident. 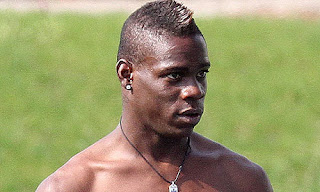 Super Mario cannot stay out of the headlines. Right from gate crashing Inter Milan’s press conference, then admitting fling with Rooney’s prostitute, Mario Balotelli has just had a car crash in Manchester but escaped unhurt. Balotelli was the driver of a white car and after crashing it, embarked on joking with onlookers. Manchester city have confirmed the accident but stated that Mario was unharmed and not at fault.
A statement from Manchester police read,

“Shortly after 3.15pm on Thursday 5 April 2012, police were called to Medlock Street, Manchester City Centre to reports of a collision between two cars.

“The passenger of one of the cars was taken to hospital for precautionary measures. Inquiries are ongoing.”

Back in 2010, within a few days of joining City, Balotelli was involved in another car crash, and was in the process found to be in possession of £5,000 in cash, after which he was asked why he was carrying such a large amount. He famously replied, ” Because I can”.
© nairobiwire.com
Kanye West Dating Kim Kardashian. < Previous
TB Joshua’s Michael Jackson, Mutharika Prophesy, And His Prophesied Life. Next >
Recommended stories you may like: