Should  Njeru Githae be on the same side with his brother in law, and the man who made him, SK Macharia, or be in the Uhuru camp? 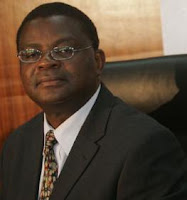 Acting Finance minister Mr Njeru Githae is walking a political tightrope. He is torn between charting his own political path and following the political inclinations of the man who made him. For the last two years, Mr Githae has been Deputy Prime Minister Uhuru Kenyatta’s point-man in Kirinyaga County. But the man who made Mr Githae, media owner SK Macharia, is alleged to be getting close to Prime Minister Raila Odinga. Now, Mr Macharia is Mr Githae’s brother-in-law. He is married to the minister’s sister. Unlike many media owners, Mr Macharia does not hide his political loyalties.
Several other Central Kenya politicians are known to be keen to support Mr Odinga’s Presidential bid in the Kibaki succession saga. This is where Mr Githae’s challenge begins. Will he manage to fully support Mr Kenyatta while his brother-in-law is looking elsewhere? Mr Macharia and Mr Kenyatta have only been on the same side once. In 2007, they both supported Mr Kibaki.
Today, they are business rivals. Mr Kenyatta has a huge stake in Mediamax Ltd, (owners of The People Daily, K24 and Kameme Fm), which compete directly with Mr Macharia’s Royal Media Services outlets. At the Ruiru rally last month, Mr Kenyatta’s supporters in Parliament publicly called on Central province residents to boycott RMS outlets because “they have openly deserted us and went to the other side after we made them grow.” Mr Githae attended the rally. Quite curiously, it is Mr Githae who replaced Mr Kenyatta at Treasury when his Cabinet position became untenable following confirmation of the ICC cases.
Sometimes, families opt not to put all their eggs in one basket.In 2002, it is Mr Macharia who personally took charge of Mr Githae’s media awareness campaigns when he first vied for the Ndia parliamentary seat. Mr Githae won. This support went on well into his first term. It continues to date. In 2002, half the Kenyatta family supported their own (Uhuru) while the rest, including cousin and uncle (Dagoretti MP Beth Mugo and George Muhoho), cast their lot with Kibaki. Soon, Mr Githae may have to confront questions on where his loyalty really lies.
© Daily Nation
UEFA Champions League Cup Comes To Kenya. < Previous
Did Joseph Kony Cast ‘Juju’ On Kony 2012 Creator? Next >
Recommended stories you may like: