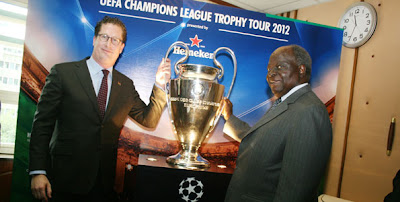 President Kibaki became one of the first Kenyans to get a feel of the UEFA Champions League trophy. The trophy was presented to him at his Harambee house office by Champions League sponsors Heineken International. Kibaki thanked Heineken for choosing Kenya as one of its destinations for its 4 country tour. He also urged them to sponsor local football.

Heineken East Africa general manager, Koen Morshuis , said that getting the trophy out of UEFA’s hand was no mean task. He added, “There is only one Champions League trophy since the tournament started in the 1992/1993 season with all the winners’ names inscribed in it; hence Uefa was very reluctant to release it.
“But the fact that Kenya was chosen alongside Mexico, China and Tanzania as the only four countries that the trophy will visit in 2012 is an indicator of how important this market is to us. And the beauty of it is that the (trophy) viewing will not only be available to the VIPs but also the average Heineken consumer on the street.”

It has not been announced the venue for the public viewing yet.

© nairobiwire.com
Real Madrid To Build US $1Billion Resort Island. < Previous
Support Uhuru Or Family? Njeru Githae’s Headache. Next >
Recommended stories you may like: