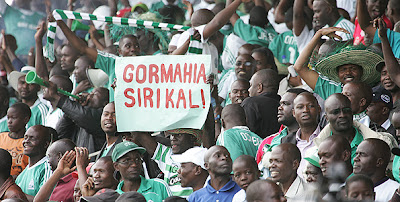 Gor Mahia are stilling receiving backlash from all quarters, and those with the power are stopping at nothing to make sure that K’ogallo are punished for causing chaos during their clash with AFC Leopards. Sports Stadia Management Board (SSMB) has passed a resolution banning Gor Mahia from using any of its stadia for at least one year. This follows the destruction Gor Mahia leaves behind SSMB’s premises any time there is a big game. Last season during Gor vs Ulinzi’s game, nothing but the concrete ‘seats’ was left standing. Though the club was charged for the damages, SSMB could not take it any more.

SSMB controls both Nyayo stadium and Moi Sports Centre Kasarani, the two biggest stadiums in Kenya. Big Gor Mahia games are hosted at Nyayo stadium where gate collection runs into millions. SSMB is willing to forfeit its share of the gate charges for the safety of its property. This will also mean a big revenue loss for Gor, which will now be forced to stage its matches in stadiums that cannot get a lot of money in gate collection. A few days ago, Supersport once again banned airing Gor Mahia’s games live, citing safety for its staff and equipment.
© nairobiwire.com
Wayne Rooney Breaks Child’s Wrist < Previous
Jaguar Denies Interest In Makadara MP Seat. Next >
Recommended stories you may like: