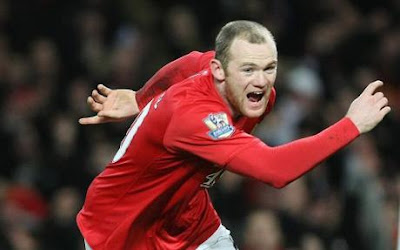 Manchester United’s Wayne Rooney has apologized for breaking a 9 year old’s wrist.The kid, identified as Jamie Thomas had gone with his father to watch the Wolves vs Man U clash but before kick off, during the players warm up, a wayward Rooney shot struck the child on his wrist as he tried to shield himself from being hit by the ball.

” The players were warming up and Rooney and Hernandez  were taking a few shots. Rooney missed one and it was coming straight towards Jamie, so he put out his hand to stop it hitting him and it broke his wrist.”

The father initially thought less of it, but at half time they were forced to seek treatment but despite, the treatment, the hand has not gotten any better.  The dad added,

“He went back to school yesterday and has had his friends signing his cast. He can’t write with his hand and we are having to help him get changed.”

The Manchester United Star, tweeted his apology.
“I want to apologise to Jamie Thomas, I have arranged for a letter and a signed shirt to be sent to his home address #getwellsoon”
© nairobiwire.com
Waititu To Erase Graffiti Along Thika Road, Or Face Arrest. < Previous
Gor Mahia Banned From Nyayo Stadium. Next >
Recommended stories you may like: