Dumb Bank Robbers Abandon Sh 36 Million… After They Were Unable To Break Seals.

The Dumbest Bank Robbers Ever.

If there are dumber thieves, then these ones are a close second. The robbery was well scripted and executed and no one raised an eyebrow. It was bloodless and perfect until it came to opening the safe where 36 million Kenya shillings ( approximately $500,000 ) was stored. 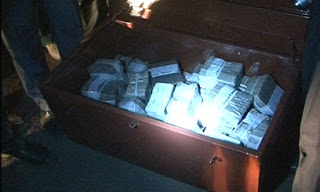 The money was to be picked up at Equity Centre, upper hill, Nairobi, and transported to Garissa by 2 Wells Fargo vans. 4 police officers were to provide escort and were to be picked up at Administration Police college, Embakasi. The driver of one of the Wells Fargo van, (who was part of the robbery plan) picked 6 robbers in police clothes and headed to Equity Centre. At 5:30 am, they were cleared by the bank and they hit the road. At Juja, they diverted about 5 kilometres from the main road. A black X Trail had now joined them. It was to be their escape car. One of the Wells Fargo guards who was not part of the plot was beaten up and handcuffed in one of the now abandoned security vans.


Meanwhile in Nairobi, the genuine AP officers who were supposed to escort the money to Garissa, arrived at Equity Centre wondering why they had not been picked up. They were informed that another crew had already left with the money. Even now, no one suspected a thing.


About 4 hours later, police were informed of an abandoned cash in transit van in Juja. The guard who had been  locked up and forgotten was found inside and taken in for questioning.

Now, everything started coming together. Wells Fargo confirmed that the van was destined for Garissa and police launched a manhunt. At 6 in the evening, hours after the movie began, the money was found abandoned at Ndarugo in Thika. Police said that the gang could not break the seals of the cash boxes and decided to abandon their loot.

To break it all down, the bank robbers planned everything with precision, the fake IDS, the escape car, and the timing, but they forgot to plan how to break the seals, or what to do if the seals refused to break. They were too close to their loot, yet too far. These must be the dumbest bank robbers.