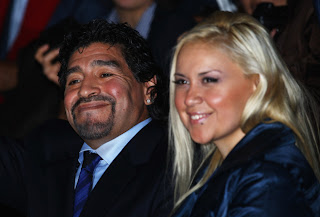 Al Wasl manager Diego Maradona is at war with Al Shabab, (not the Somali one ). His club, Al Wasl, lost contentiously to rivals  Al Shabab, and all hell broke loose. Argentine fans watching the game in the VIP area got into a war of words with supporters of the winners Al Shabab. The bone of contention was the actions of  Al Shabab’s player Ciel.

Among the people in the crowd was Maradona’s wife. When the fans got rowdy, Maradona rushed to the crowd to help his wife. Al Wasl was escorted out by police, but their coach, Maradona, had no kind words to their opponents.
“[The Shabab fans] are cowards,” Maradona told Gulf News. “They only attack women and have no courage to confront men.We accept everything in football, but do not accept men swearing at women.”
“I accept defeat but I am not happy with what happened against the fans tonight,” Maradona continued. “Any fans upset by this should know that I was only there to defend my wife and I am only against the people who were directly insulting my wife.”
© nairobiwire.com
Nairobi UEFA Trophy Public Viewing Venues / Details. < Previous
Homeboyz Radio Now On 103.5 FM. Next >
Recommended stories you may like: