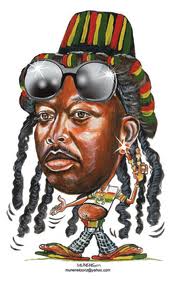 Makadara MP, Mike Sonko is making headlines again. Unconfirmed reports claim that the flamboyant mp has bought himself a Ferrari. The reports appearing on a blog, claim that the Ferarri is currently at a warehouse in Changamwe awaiting clearance. The make of the Ferarri is not known but whatever it is , they don’t come cheap. The report should be treated as gossip until nairobi wire confirms its authenticity.

Sonko has seen a rise in media coverage and a simultaneous rise in ego. Since he was elected to parliament, and the ejection of Simon Mbugua (the previous drama queen), the spotlight has been on him. In the short period he has been MP, he has hit metal doors, slept on tarmac, climbed up spiked gates, led uncountable demonstrations, worn studs to parliament, donated sh 100, 000 in 50 sh denominations, cut city councils ‘parking padlocks’ gatecrashed Churchill Live and the list is endless.

Ferguson Regrets Not having Bought Joe Hart. < Previous
Pangani Underground Tunnel Open, 2 Months Before Official Opening of Thiika Road. Next >
Recommended stories you may like: