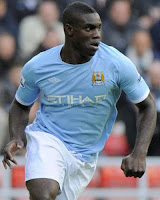 Manchester city’s defender Micah Richards has quit Twitter after racial abuses. Sources close to the 23 year old say that he enjoyed interacting with Man City fans but has decided to permanently close his Twitter account following consistent abuses from a number of his ‘fans’, targeting his skin colour. The abuses have significantly risen in recent months.Police are investigating Richards’ case.