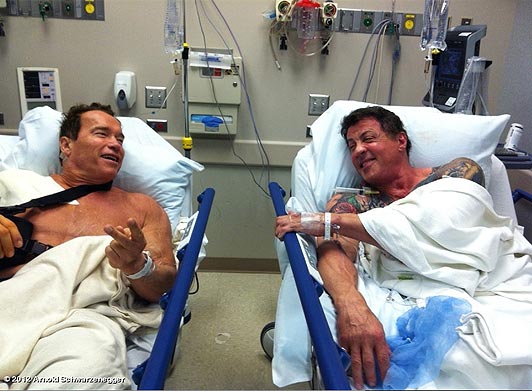 Two of Hollywood’s biggest names, Arnold Schwarzenegger and Sylvester Stallone , were coincidentally in the same hospital at the same time in the same room. They were incidentally both having shoulder surgeries. The Terminator star had gone to receive shoulder treatment after he was injured while filming his latest movie. Rambo was also at the hospital undergoing a minor shoulder surgery. It was in fact Schwarzenegger who provided the photo as a post on his WhoSay.com account. He wrote..


“After all the action, stunts & physical abuse shooting ‘The Expendables 2’ and ‘The Last Stand,’ it was time for a little tune up on my shoulder. Look who was coincidentally waiting in line behind me for his shoulder surgery.”

The two are starring together in the Expendables 2 ( set for release in August ) and in ‘The Tomb’.

50 Cent Visits Nairobi’s Kibera Slum. < Previous
The Most Liked Kenyan Facebook Pages Next >
Recommended stories you may like: