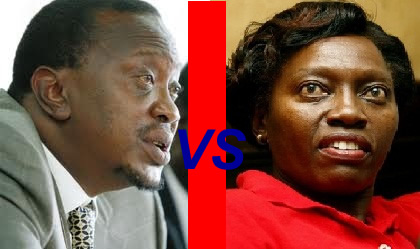 Politicians, KTN, Safaricom Facebook pages show strongest growth
The top Kenyan Facebook pages continued to draw fans support this week albeit at differing paces. While Martha Karua (the long running top personality facebook page) continued to rise, this week she lost her mantle at the top to Uhuru Kenyatta who this week has added 5,000+ fans with over 1000 joining yesterday alone.

KTN TV and Safaricom all continued to rise while Daily Nation, Capital FM and Mwalimu Kingang’i slowed somewhat.  The top gainer of the week was Uhuru Kenyatta who has 155,000+ fans on Facebook. He added 5,649 fans compared to Karua’s 2,590 this week bringing his fan count to 155,446 compared to Karua’s 155,395.

In terms of personalities, Uhuru Kenyatta, Martha Karua, Mwalimu Kingangi, Maina Kageni, Raila Odinga and William Ruto lead the pack. Politicians tend to have split numbers because they have multiple pages unlike corporate brands which have one main point of reference page. For example, Raila Odinga has two Facebook fanpages one with 78,000 fans and the other with 74,000 although membership could overlap. Ditto: William Ruto who has two pages one with 58,000 fans the other 52,972. Kalonzo Musyoka has 19,156fans. Uhuru has his fan page but also has Team Uhuru. Facebook pages not only are good for building a brand but they also support it and recruit more people to the same brand.

Today, Facebook has overtaken Google as the internet’s top referral site so if you have a message, you should be positioned as to take advantage of traffic coming from Facebook. For example if you have a website, it would be good to make it convenient for visitors to share content on Facebook. That way people can spread your message to even more friends.
Again having a Facebook page not only extends your reach but also allows you to carry out campaigns on a platform that hosts a great deal of people much like the penny press of the 19th Century helped bring about massification: industrial towns that produced more than could be consumed in their localities could market them across the country through advertising in cheap newspapers helping bring about the industrial revolution.