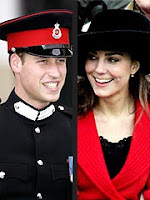 The princess may be coming to Kenya this year. Prince William and her wife the Duchess of Cambridge are said to be planning to grace the Safaricom lewa Marathon. Kate has for a long time talked of her desire to come to Africa and especially Kenya, more so during the drought situation last year.

A certain Mr. Maina who works with UNICEF revealed to the media last year that the princess had revealed to him that she would be coming to Kenya soon, and now according to the UK Telegraph, Prince William has hinted that he might compete in the Safaricom marathon