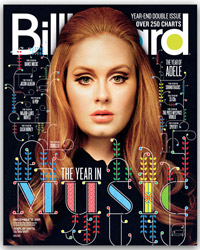 Billboard has released a list of their top artists of 2011.The list  takes into account album sales, charting singles, radio airplay and other factors. Adele had the best selling album of the year, “21”, selling 4.8 million copies. Followed by Swift’s “Speak Now,” Gaga’s “Born This Way,” Jason Aldean’s “My Kinda Party” and Susan Boyle’s “The Gift.”

Adele’s ‘rolling in the deep’ was also the most popular song followed by LMFAO’s “Party Rock Anthem”at number 2, Katy Perry’s “Firework”and “E.T.” at number 3 and 4 and Pitbull’s “Give Me Everything” at number 5.
Adele was the declared top female and artist of the year. Rihanna was No. 2, followed by Katy Perry and Lady Gaga. Lil Wayne was the top male.

Lil Wayne In A Fist Fight In South Africa. < Previous
Google Honours Kenya By Designing A Jamhuri Day Doodle. Next >
Recommended stories you may like: