George Bush Sr Sends Condolences For The Death of Mandela 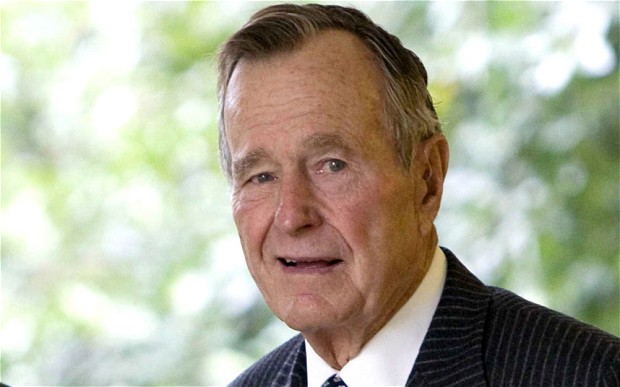 George Bush Sr, the former president of the United States, sent social media sites into a frenzy on Saturday by falsely announcing that Nelson Mandela had died.

Mr Bush, 89, sent condolences which were picked up by an American newswire, BNO. It was then flashed up by CNN.
Jim McGrath, spokesman for Mr Bush, sent out an email entitled: “Statement by President George H. W. Bush on the death of Nelson Mandela.”
He wrote on behalf of the former president: “”Barbara and I mourn the passing of one of the greatest believers in freedom we have had the privilege to know.
“As President, I watched in wonder as Nelson Mandela had the remarkable capacity to forgive his jailers following 26 years of wrongful imprisonment – setting a powerful example of redemption and grace for us all. He was a man of tremendous moral courage, who changed the course of history in his country. Barbara and I had great respect for President Mandela, and send our condolences to his family and countrymen.”
But Mr McGrath tweeted and emailed a statement that the earlier comments were based on a flash from the Washington Post.
“We have no independent verification of events in South Africa,” Mr McGrath wrote.
He later added: “The statement sent this morning was the result of my mis-reading the header on the WaPo news flash. Stupid mistake by me. Apologies to all.”
Nelson Mandela, 95, left hospital in Pretoria on Sunday morning to return to his home in the Johannesburg suburb of Houghton.
He was taken to hospital on June 8 and spent almost three months in the clinic, suffering from a recurring lung infection.
The Presidency issued a statement on Saturday, saying that South Africa’s first post-Apartheid president remained “in a critical but stable condition.”
It said: “At times his condition becomes unstable, but he responds to medical interventions.”
-Telegraph