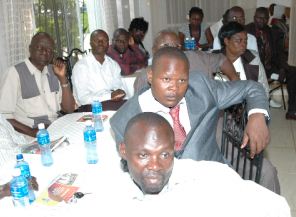 KISUMU county representatives want body guards assigned to them for personal protection.
County majority leader Samuel Ong’ou said just like MPs who have armed security officers, they are equally important in the society thus need security aides.
Ong’ou made the request to Kisumu county police commander David Ng’etich who had paid a courtesy call at the assembly on Tuesday.
He said county representatives perform the same duties as MPs and need body guards. “County representatives should be fully guarded as their work exposes them to danger,” Ong’ou said.
A section of representatives interviewed yesterday refused to comment on the matter. They said they did not want to contradict the Majority Leader as it will be deemed as betrayal.
Kisumu County Residence Voice chairman Audi Ogada however said there is an acute shortage of police officers not only in Kisumu but also in the whole country.
“It is unfair for the County representatives to demand for police protection while ordinary Kisumu residents were still living in fear due to insecurity,” Ogada said.
But while addressing the assembly on Tuesday as the majority leader made the request, County police commander David Ng’etich said that assigning police officers for VIP protection remains the State duty.

He however, urged the County representatives to follow the correct procedures in their demand for the VIP protection. He further assured them that as the head of police in the county he will ensure their security is guaranteed and called for a close working relationship with his office.
Ng’etich urged the members to pass that request through the assembly speaker Anne Adul to the National Assembly speaker Justin Muturi.
“The National Assembly speaker will then communicate to the Inspector General of Police regarding the same,” Ng’etich said. The meeting was also attended by the county commissioner Lorna Odero.
The number of police officers deployed to protect politicians and other VIPs rose from 2,000 to 5,000 this year representing more than five per cent of the total number of 70,000 officers in the police service.

This is according to proposals in a new policy paper on VIP protection commissioned amid reports that too many officers were deployed on non-core duties when there was a serious shortage of police officers on the beat.
The ‘Policy on Provision of Security to VIPs and other State Officers’ document sought to regulate the manner in which VIP protection is handled to avoid abuse.

Loading...
Be Careful When Choosing Names For Your Kids… Their Meanings < Previous
Video – Paul Ngei’s Daughter Hawking Condoms in Nairobi Next >
Recommended stories you may like: