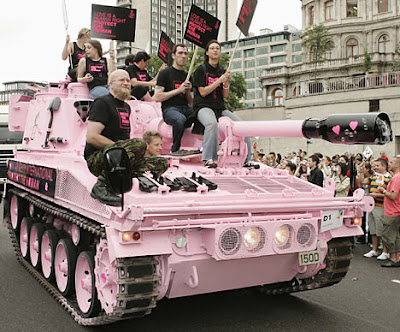 The United States military leaves no stone unturned when looking for technological solutions to winning in the theater of war. The Manhattan Project in World War II is one of the more well-known examples, but American military history is rife with others. An esoteric one: During the American Revolution, inventor David Bushell came up with an idea to fight against the British blockade of American ports—a device we now call the submarine. But some of these ideas were more lunacy than science. A top example? The gay bomb.

In 1994, the Wright Laboratory—part of the U.S. Air Force—investigated the possibility of using pheromones as a weapon against enemy troops. Specifically, the proposal requested a six year, $7.5 million grant to see if dousing enemy combatants en masse with female pheromones would cause a biological reaction among the troops. Ideally, the three-page proposal suggested, the affected soldiers would find their brothers-in-arms “sexually irresistible” (per the BBC) and, per Fox News, noted that “[o]ne distasteful but completely non-lethal example would be strong aphrodisiacs, especially if the chemical also caused homosexual behavior.” The weapon colloquially took on the “gay bomb” moniker shortly after being discovered by a military spending watchdog group via a Freedom of Information Act request.
Wright Laboratory (now defunct, but not for the above) never received the funding for further study.

Loading...
Nakuru Governor Faces Impeachment 3 Months After Election < Previous
Photo – How Tanzania Rolled Out The Red Carpet For Obama… Excesses? Next >
Recommended stories you may like: