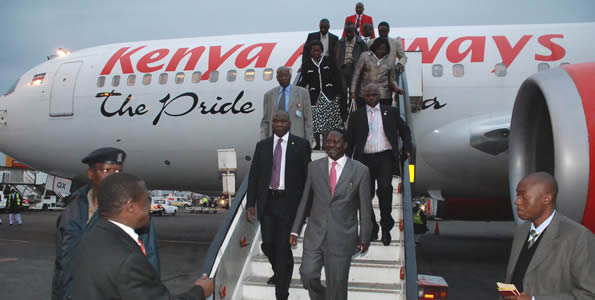 After reports surfaced that former prime minister Raila Odinga had been denied VIP lounge access at JKIA, the Kenya Airports Authority came out to clarify things.
According to them, Raila was not denied VIP treatment, but only access to the airside was denied for his convoy. Apparently, only the president, deputy president and visiting heads of states allowed to have their motorcades there.

The statement read in part,” Kenya Airports Authority (KAA) would like to clarify that the former Prime Minister and his wife were not denied access to the VIP lounge at Jomo Kenyatta International Airport (JKIA).
KAA has confirmed that, contrary to reports appearing in sections of the media, former Prime Minister Raila Odinga and his wife Ida were allowed access and the use of the Government VIP Lounge on Monday and last Friday respectively.
However, the authority confirmed that no convoy can drive to the airside, because JKIA is a highly restricted security zone.
… According to national security regulations, only vehicle convoys belonging to the President of Kenya, visiting Heads of State and the Deputy President of Kenya can access the airside at any of the airports in Kenya.”

It emerged that even among VIP circles, some are more equal than others, and Raila Odinga is unfortunately at the lowest level of VIP, as was confirmed by this statement from the government spokesman Muthui Kariuki.

The Airport has three VIP Lounges.

This Lounge is open for use by the former Prime Minister and all retired Vice Presidents along other Senior Government officials.  This Lounge was made available to Hon. Raila Odinga and also to his wife on Monday and Friday last week while travelling to Kisumu.

While Hon. Raila Odinga may use the said Lounge, he cannot drive in a convoy to the airside.  This, according to ICAO and IATA rules is not allowed.

Suffice to say that even retired Presidents Moi and Kibaki no longer drive in their convoys to the airside -, they walk – Period.  The directive referred in the media today is not Mr. Kimemia’s but that of the National Security Advisory Committee in concert with ICAO and IATA.

There are people in this country who have perfected the art of blaming the Secretary to the Cabinet Mr. Francis Kimemia wherever things don’t go their way.

The Management of our airports does not fall under Mr. Kimemia as there is a substantive Managing Director.  I can assure you gentlemen that Mr. Gichuki is doing a fine job running our airports without any prodding from Mr. Kimemia.

If dragging Mr. Kimemia’s name into this sordid business is meant to whip up Public sympathy then it has failed miserably.

Loading...
Video – President Kenyatta’s Video Message To Film Makers At The Cannes Festival < Previous
Did Akinyi Chinedu Bleach Her Skin? – Before n After Photos Next >
Recommended stories you may like: