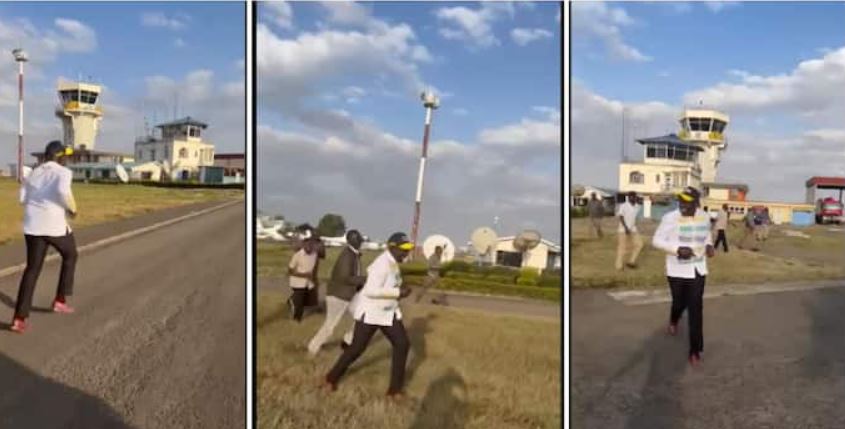 President William Ruto has recounted the moment he was filmed sprinting to board a helicopter on the last day of campaigns.

Speaking during a church service at Faith Evangelistic Ministry (FEM) Family Church, in Karen, Nairobi, Ruto said he was in a race against time to beat the 6.00 pm deadline slated for the final day of campaigns.

On the said day, August 6, Ruto was scheduled to address rallies in Narok, Nakuru and Nairobi counties.

The President said they had to add Kiambu county to the itinerary in a last-gasp bid to sway Mt Kenya voters.

“I was reminded of the last day of the campaign period. We had a rally in Narok, Mai Mahiu and Nyayo Stadium. Then we had a problem in Kiambu. All indications based on opinion polls, ground activities and the media gave the perception that we were not to win Kiambu,” he said.

“It was 5.30 pm the campaigns were to close at 6 pm. Time was running out and we were split between attending the closing rally at Kirigiti stadium… It was urgent that we did something and the rally appeared as a must-not-miss. We had less than 30 minutes to do so,” Ruto narrated.

“We were debating if we should go since it was thirty minutes. Finally, we decided to go. I was even caught on camera running to the plane because there was no time,” he added.

Ruto said his entourage arrived at Kirigiti stadium 18 minutes before 6 pm. With barely enough time to plead their cases to the Kiambu voters, Ruto cut short speeches and decided to pray instead.

“After short speeches, with time running out on us, I knew that the circumstances demanded an extraordinary feat… and I asked the audience to remove their caps for a word of prayer. You know what, we won the seat,” he said.

Ruto said “prayer works, for we did not only win the national vote but also conquered Kiambu”.

The Head of State said the same prayers helped Kenya enjoy post-election peace “even when the vote was a close call similar to the 2007 one that bred violence”.

Ruto added that prayers will see the country through its trying moments.

“I have two things to tell you now as the President of Kenya, I need (your) help. You know our situation of debt, you see in the middle-income category, normally other countries raise 20 or 25 percent of their GDP in terms of revenue but for us, it’s 14 percent.

“I want you to pray for our nation so that we can move our revenue from 14 percent to 25 percent (from Ksh2.1 trillion to between Ksh4 and Ksh5 trillion. The second thing is that I need help with changing the environment,” Ruto said.

In case you missed Ruto’s final dash, check it out below.

Four Lessons Ruto can learn from Singapore’s Founding Father – Lee Kuan Yew- on how to develop A Country < Previous
Boy Sneaks Into Girls’ High School With Condoms Next >
Recommended stories you may like: