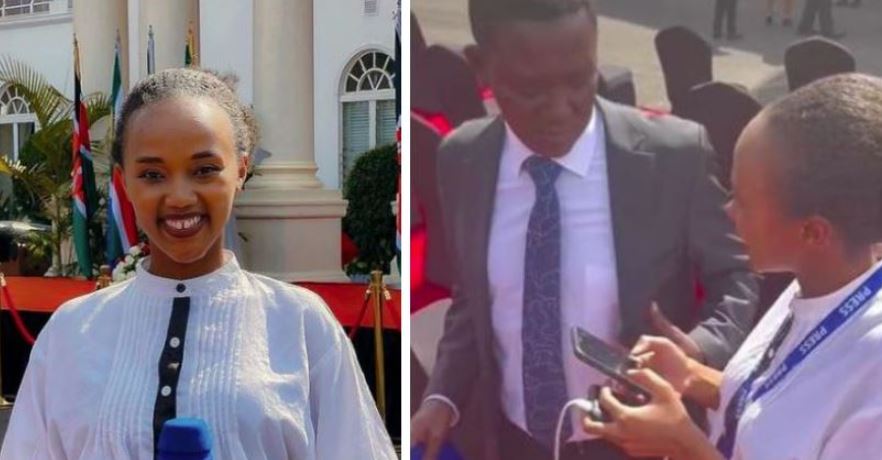 Liz Jackson is a reporter for Stage Presence Media(SPM Buzz) who got her 15 seconds of fame when she was captured on video taking the contacts of Foreign and Diaspora Affairs Cabinet Secretary Dr Alfred Mutua.

Who is Liz Jackson?

I am a project manager with a passion for journalism. I work for SPM Buzz, and I am nine months old in the journalism field. I finished my studies in project management in January this year and I started asking myself ‘what next?’ The project management jobs I got were somehow boring to me and I wanted something interesting, and journalism was it. So, I DM (direct message) Eddie Butita, the owner of SPM Buzz at 1 am because he is a celebrity so when he wakes up my message would be at the top. He replied to my message around 6.15 am and called me for an interview. I went and got the job.

Tell us about your first interview.

It was so nerve-wracking; my first interview was with Tik Tok star Azziad Nasenya. I was scared and she on the other hand was very confident, but I kept my cool. My second interview was with rapper Khaligraph Jones. At the time I was just one month old in the industry.

What happened when Foreign and Diaspora Affairs CS Alfred Mutua gave you his number?

I got the invitation to State House very late and by late, I mean 40 minutes before the event was to start. I went to State House, but I was very scared and up until I got into the gate, I did not even know what was happening. I asked my colleagues what was happening, and they filled me in, and I started to research questions to ask. President William Ruto and Cyril Ramaphosa of South Africa arrived, and they went inside the State House. We remained outside and the sun was very hot that day. If you see my pictures my makeup was even off.

The two presidents later came out and gave their speeches and I remember President Ruto saying that he was going to take four questions from the media. I thought of a question and asked to be given the microphone. I don’t know if it is my imagination but when the mic was handed to me there was a sudden pin-drop silence. My question was on art and entertainment, and when I finished asking the question, I heard someone laughing, so I thought my question was stupid. But then I saw the CS turn and looked at me and appeared to be acknowledging my question.

No, before we even get to the CS let me say that the President chose to start with my question, and he called me by my name. In my head I was like ‘I have made it, the president knows my name’. After the question-and-answer session, the presidents went inside the State House and that is when the CS came to greet the media. He greeted everyone; it is just that that it is not on record. But when I saw him coming towards me, in my head I said I must secure an interview with him. So, when it was my time to greet him, I asked him if we could plan for an exclusive interview some other time and he said yes. I asked him for his phone number, and he gave it to me; that moment was captured by our camera person.

I first posted the video on Tik Tok, and it got 30,000 views. It was all good until Twitter started blowing up. I am not very active on Twitter, but when I saw Alfred Mutua trending, I clicked on it and saw my face. I was shocked.

During a podcast that you host you said that you only date men who earn more than Sh90,000 and that you have recently broken up with a billionaire. Do you think that it was fate meeting the CS?

(Laughs)…Guys have connected what I said in the podcast and me taking the CS’s phone number. The truth is that he was not a target, and nothing was planned. But I still want a man who earns more than Sh90,000; I just can’t date anyone earning less than I do. I mean Sh90,000 is just my rent. Don’t get me wrong money isn’t everything but where I draw the line is how this person is treating me. Having a lot of money does not mean that you get to control me. I want to be able to pursue my dreams and be the greatest person I can be. Mubaba hawezi kunicontrol.

I am single unless there is a billionaire who wants me right now. My ideal man has to make more money than I do, have a good car, and a house in the suburbs, and he should be generous.

When you are not working what do you do?

I love travelling and watching documentaries, especially the ones about serial killers, crime and investigative pieces.

Things To Know About Model, Content Creator Kate Kabi < Previous
My Story – I’m a Grandmother of 7 And I’ve Just Finished My Form Three Studies Next >
Recommended stories you may like: