A reporter who was captured in a viral video taking the contacts of Foreign and Diaspora Affairs Cabinet Secretary Dr Alfred Mutua has spoken out, saying she has been subjected to cyberbullying.

It was Liz who asked the Heads of State how they plan to ease the interaction of South African and Kenyan cultures, arts, and entertainment.

Recounting the moment, Liz said she thought her question was stupid until CS Alfred Mutua turned in his seat and looked at her.

After the presser, Liz reached out to CS Mutua seeking his contacts, with the moment being caught on video and shared widely on social media.

The video was edited to include a snippet of Suna East Member of Parliament Junet Mohammed shouting, ‘hii imeenda’.

Internet users made fun of the moment with some claiming that Liz had an ulterior motive for taking CS Mutua’s phone number. 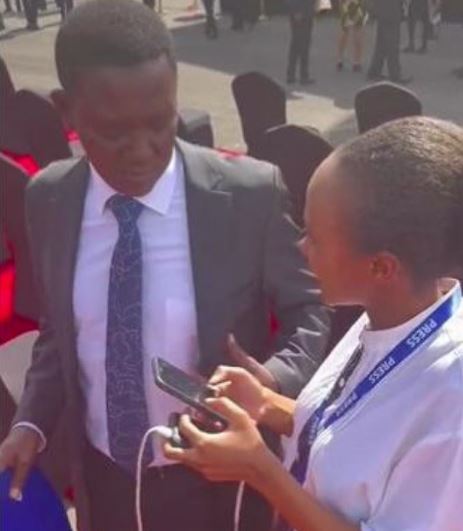 But the journalist says she took the number to carry out an exclusive interview with the former Machakos governor for SPM Buzz.

Liz says the online jokes were funny at first until she started getting cyber bullied.

“I have not spoken to him since because people have bullied me left, right and center. I saw the video that has that Junet part added, and I saw the comments. At first, it was funny, but now people are bullying me, making me feel bad. I even saw Andrew Kibe did something concerning this.

“This entire speculation makes me feel bad, obviously, but what people don’t know is that I’m also the head of the digital at SPM Buzz, so anything that goes online or any number that we can get, I should pick it,” she said.

Liz insisted she did not do anything wrong and was only doing her job.

“People think I should not have taken the number, but as the head of digital, any time we need an interview, I am the one to ask. I cannot ask my bosses to look for these people to arrange an interview for me. I am the one to do it. So I did not do anything wrong in my capacity. I always do that. If he had given me his personal assistant’s or security’s number, I would still have taken it,” she said.

Liz pointed out that if a man had asked for Mutua’s number, he wouldn’t have been bullied and insulted as she has been.