Trade Cabinet Secretary Moses Kuria has implored Kenyans on social media to stop abusing him now that he is a government officer.

The newly sworn-in minister spoke at the NSSF buildings Thursday during the handover from outgoing Trade CS Betty Maina.

The former Gatudnu South MP joked that those who troll him on social media might get in trouble for disparaging the government.

“For those who have been abusing me on social media, please do not do it from now henceforth. I’m now in government. You might be abusing the government, and you might be in trouble,” he said. 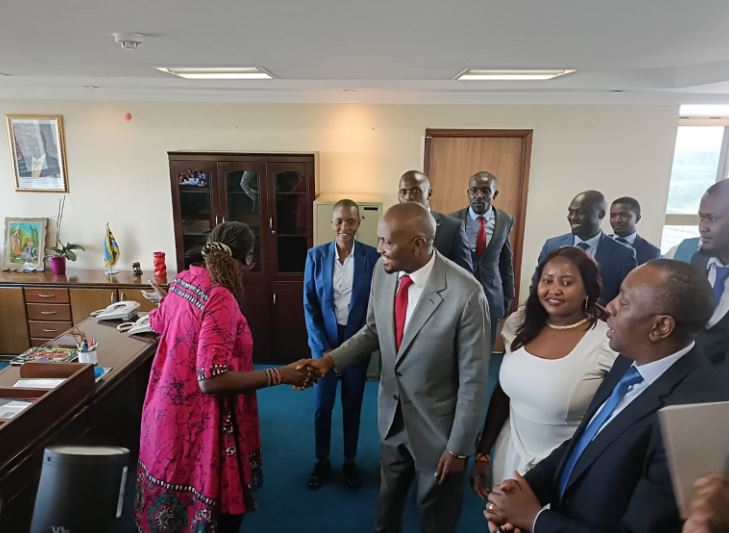 Moses Kuria at the same time called on opposition leader Raila Odinga to consider his stance on GMO foods.

“I urge Raila Odinga to withdraw the case against GMO. We should not be afraid that we are going to die more than the rich countries.

“We want to be competitive. With GMOs, the cost of feeds will be lower, and we will increase our production,” he said.

“I have never seen a rich miserable, broke entity like KBC.  They have huge tracks of land, but they are broke. Next week, we will launch the construction of 100,000 houses on KBC land. We are tapping into opportunities,” the CS said.

On other trade-related matters, Kuria said: “We are introducing a levy on imports to grow our exports. I will introduce a bill in parliament. We will, however, lower the fees for the inspection of imports.

“Importers be ready to pay. We will have a conversation with the business people. For the young people please focus on manufacturing and value addition.”

Sakaja’s CESs Appointments Not Inclusive, But Politically Effective < Previous
Silvanus Osoro Speaks After Monthly Period Comment About CS Malonza Next >
Recommended stories you may like: