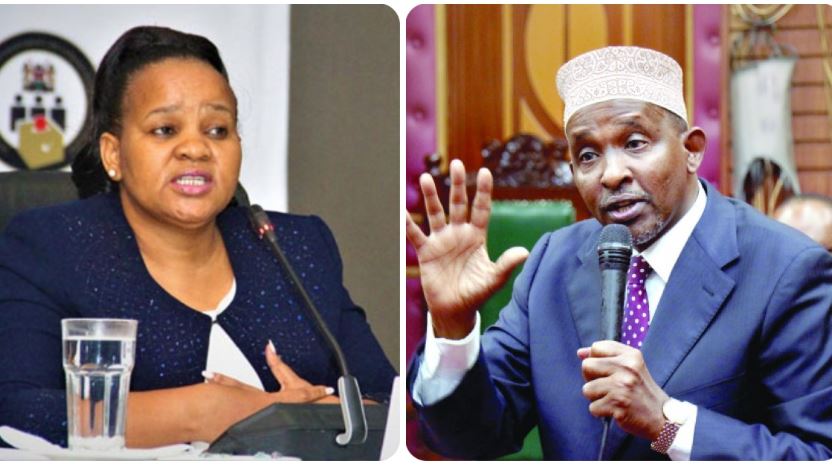 Aden Duale has called for the dismissal of the four infamous rebel IEBC commissioners led by Vice Chair Juliana Cherera.

The Garissa Township MP-elect said it should not be business as usual after the Supreme Court vindicated IEBC Chair  Wafula Chebukati.

Duale said the actions of the four break-away commissioners amounted to gross misconduct.

“No it cannot be business as usual! The actions in what appeared like cinema featuring Cherera as the lead actor and voice actress is a pure blatant gross violation of the Constitution and the law for attempting to subvert the will of People through fabrications,” Duale said in a statement Tuesday night.

He accused Cherera, Justus Nyang’aya, Irene Masit and Francis Wanderi of colluding with their masters to foil a legit election.

“Their actions were also nothing short of gross misconduct as they worked in cohort with their wicked masters to negate a free and fair election.

“The four commissioners should be held accountable both individually and collectively. They cannot turn on and off like a switch and expect us to just forget everything. They must face the music,” Duale added.

“Article 251 of the Constitution which provides for the removal of commissioners on grounds of gross violation of the Constitution and the law and gross misconduct can only be the only solution! This is the music they must face! For now, they need to know sisi Wakenya hatubebangwi hivyo.”

This comes after the four commissioners changed their tune on Tuesday, saying they now agree with Chebukati and the Supreme Court verdict.

Sossion To Replace Magoha? He Speaks < Previous
Tabitha Karanja on Fuel Allowance: “I Was Looking Out For Young Senators” Next >
Recommended stories you may like: