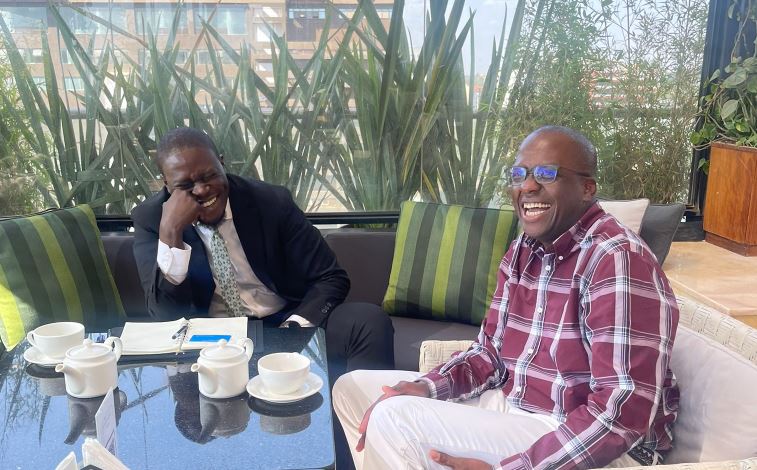 Johnson Sakaja and Polycarp Igathe have been praised for exhibiting great sportsmanship after they met and had a laugh following the recently concluded General Election.

The two battled it out for the Nairobi Governor seat in what was expected to be a neck-to-neck battle. The former Nairobi Senator ultimately won resoundingly with over 811,000 votes, against Igathe’s 594,000.

Their fierce rivalry had played out during the heated televised gubernatorial debate that some political observers believe tilted Nairobi voters in favor of Sakaja.

Many would have expected that their rivalry would spill over after the elections, but Sakaja and Igathe have shown that there are no permanent enemies in politics.

They linked up on Thursday, August 18, for a cup of tea and appeared to have had a jolly good time. 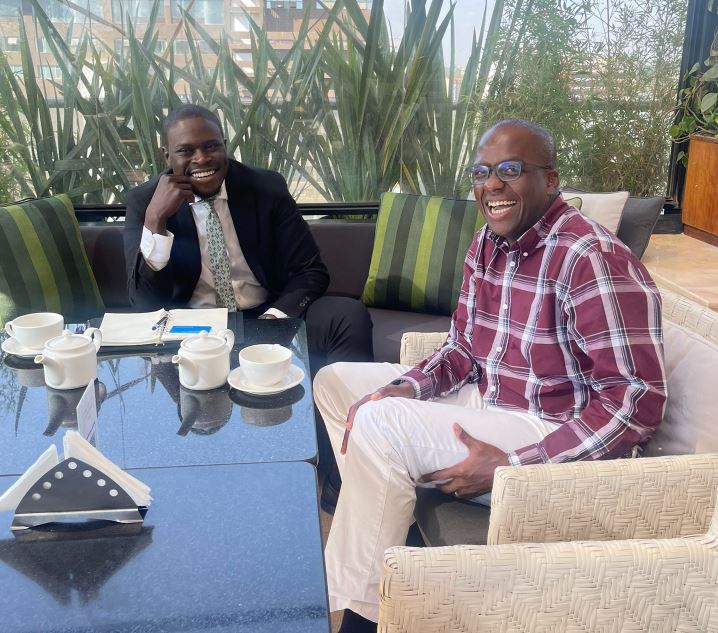 Taking to Twitter, Nairobi Governor-elect Sakaja shared photos and said he had a wonderful conversation with Igathe.

Some Kenyans on Twitter were evidently impressed by Igathe and Sakaja, and we have copiled some of those reactions below.

I salute the two of you. We need this kind of leadership. You both recognize that you were not enemies, just competitors. Igathe was gracious in defeat, Sakaja was magnanimous. The Former PM Raila Odinga should follow Igathe’s example. We’re all Kenyans regardless of who wins

Manze this is so inspiring @SakajaJohnson @polyigathe I can see a very bright future of upcoming young leaders thanks to the two of you who have shown that it is possible. You can differ in opinions but you can never disintegrate the society. Definitely, Nairobi is safe hands.

That why @polyigathe get recruited by blue chip companies. He is now strategic to do business with Nairobi County for Equity Bank. You must seize the opportunity. Business is relational and networks. Who else can network better with Sakaja than Igathe in Equity Bank.

The leadership we desire 🙌🏾🎊

Moreover, your gubernatorial debate was mind blowing. That was a show and a debate like no other. From the language and vocabulary, to convey your ideas and manifestos, you did it so well. Am so proud of you guys and Nairobians should be as well.

Juu tunataka nairobi ifanye kazi inavyofaa
.Kudos sir.. This is the peace we should embrace. Come together unite our ideas for the sake if the common mwananchi. Its not always about me but us.. @FiehCRetsam

If my gubernatorial candidate of choice has accepted and cooperated with you, who am I to state otherwise.
First things first, congratulations Sakaja.

This is pure “siasa safi”. Glad that you guys are pioneering such level of politics and leadership. This should be emulated by you fellow young leaders for the betterment of development in our country. Keep up the good work @SakajaJohnson and @polyigathe . Nawaenzi

This is true leadership…These two are Patriots….Competition is not equal to enemity…The winner deserves all the support…@polyigathe you earned my respect and I will always hold u in my heart as one Patriot who chose his country over political vendetta!

This is how it should be. Just this simple https://t.co/9m3jksURmL

There are civilized politicians and then there are uncivilized common wananchi’s who what to go for each others necks! https://t.co/6GCUkGi7Gg

You are good leader , Sakaja your political future is great .All the best siasa safi https://t.co/DuqNoEG7Uh

Can we adopt this? Those who take vengeance or bear a grudge against the sons of your own people Luo, Kikuyu, or Kalenjin, please note that in one way or the other, you need each other. See how these two fellows are having a sober conversation.

Setting a great example of how politics should be done. https://t.co/cp5kSzgHsH

If only Raila and William would have tea. This good leadership! https://t.co/ZTZIlMkyGf

Indeed this is #SiasaSafi
Kenya loves you forever @polyigathe
H.E @SakajaJohnson.
Now we need Nairobi we want. The City you promised to wok for every Kenyan.
We have no ⏰. Kazi ndio mingi dakika machache. #2027 is drawing closer. 🚴‍♀️🚴‍♀️🚴‍♀️ https://t.co/9P5Sc7J0oF

President-Elect Ruto, Uhuru, Raila Meet US Delegation Led by Senator Coons < Previous
Rigathi: Uhuru Not Needed For Ruto Swearing-in Next >
Recommended stories you may like: