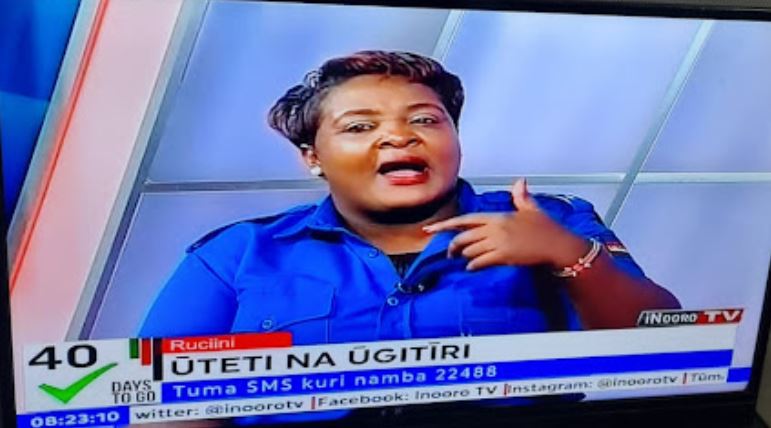 An aspirant for the Nairobi Woman Rep seat was Wednesday arrested after appearing in a TV uniform while dressed in a police uniform.

Monica Wamaitha Gitau had attended an interview on Inooro TV at about 9 am when members of the public tipped police that a civilian interviewee was wearing a police uniform.

After her interview, Ms Wamaitha found police officers waiting for her outside Royal Media Services(RMS) studios in Nairobi.

“Stapol Kilimani and team embarked on a fact-finding mission to the studios located along Maalim Juma road Dennis Prit road and ambushed the suspect who was still in the same regalia,” a police report stated.

According to eyewitness accounts, the officers told Ms Wamaitha that she was impersonating a police officer.

Ms Wamaitha on her part argued that she was a retired Administration Police Service officer.

Wamaitha, who is vying for the Nairobi Women Representative seat on Usawa Party ticket, retired from the service in 2011.

Officers arrested the aspirant and booked her at the Kilimani police station.

“She said she retired long ago but can’t explain why she is in official uniform,” said Kilimani OCPD Andrew Mbogo.

“We are investigating why she was wearing the uniform and probably by tomorrow morning we shall give a full report. We will reveal the law she breached by then. She is purported to have retired from the Administration Police Service in 2011. What she did is an offence.”

The police boss said Wamaitha would be charged with various charges including impersonation of a law enforcement officer and possession of the police uniform.

Wajackoyah To Hold Fundraiser For Kenya’s Debt If Elected President < Previous
The Trending Memes and Tweets This Last Day of June Next >
Recommended stories you may like: