My Story: Flu Antibiotics Turned Me Blind, Nearly Killed Me 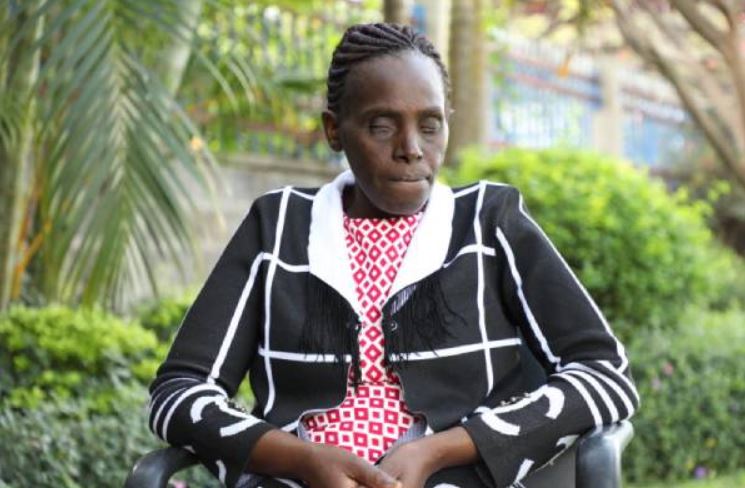 Emily Njeri was healthy until 2014 when she bought antibiotics from a local pharmacy to treat flu. The medication however had some adverse side effects that nearly killed Njeri in addition to turning her blind.

I was okay until 2014 when I became unwell. It started like a flu accompanied by chest congestion. At that time, I was full of life, conducting my business around Industrial Area, Nairobi. I tried taking warm water during the day but there was no relief. I, therefore, decided to close my business and walk to a pharmacy to get an antibiotic.

Yes, I bought six tablets for Sh30 then went home. Since I was in pain, I took them as prescribed then went to sleep. Waking up in the morning, I was far from healed, my body had reacted to the drugs causing swellings all over it.

Did you notice the reaction immediately you woke up?

The first person to notice was my last born son. He innocently made a joke that I had grown fat overnight. I brushed off his statement, but he insisted that I step out so that our neighbour could bear him witness. I was hesitant, but when I stepped out, the first comment I got from the neighbour took me aback. She just asked me to take a mirror and check myself before I rush to the hospital.

When I went back into the house and checked, I was so shocked I dropped the mirror. I left for a nearby hospital, which said they could not handle the case and referred me to Mbagathi Hospital.

What did Mbagathi discover?

The hospital discovered that the medicine I took had Sulphur, which had reacted with my body.

How come you ended up blind, despite the diagnosis?

I stayed in the hospital for a few days, but wasn’t improving. My family requested that I be transferred to another hospital in Murang’a and by the time I got there things were getting out of hand. The hospital denied me admission, saying they could not handle the case. So, they wrote a transfer letter to Kenyatta National Hospital. By the time KNH doctors started handling my case, my skin was already peeling off.

What were you told at Kenyatta?

At Kenyatta, they tried as much as they could to save my life. I was on the brink of death, and even gave my children to my sister. The drug had severely damaged my body to an extent my skin was peeling off.

For six months, I was isolated and mostly naked. As I was healing, I was taken for a blood test in which it was discovered that only two per cent of my blood was clean. So, I had to undergo another process of cleaning blood. At the sixth month in isolation, I was officially pronounced blind. That’s after my skin had started healing.

How did this happen?

I was taken to the eye clinic section of the hospital to check my sight. After the checkup, I was told that I would never see again.

What was your reaction?

I lost hope, I tried to commit suicide twice. I struggled to accept my condition.

You recently learnt that there is hope at the end of the tunnel, how did you get here?

I was advised by a friend to try Lions SightFirst Eye Hospital, where tests revealed that I could see again after an operation. I was told my blindness was caused by a sticky skin that healed while lying on the eyes. Therefore, if an operation is conducted to detach the skin, I will definitely see.

With all this hustle did you try to sue the person who sold you the medicine?

When I got out of the hospital, I found out that he had relocated, his pharmacy was among the structures that were demolished to pave way for a road. Worse still, the man had operated the shop in the area for barely a month by the time I bought the medicine, so we were unable to locate him.

What can you tell Kenyans?

First of all, I will call for their support, because for me to regain my eyesight, surgery must be done in India, and this is very costly; I will appreciate whichever support. Secondly, they should be on the lookout. A number of these people operating pharmacies are just after the money, they lack qualification. So to be on the safer side avoid over-the-counter medicine.