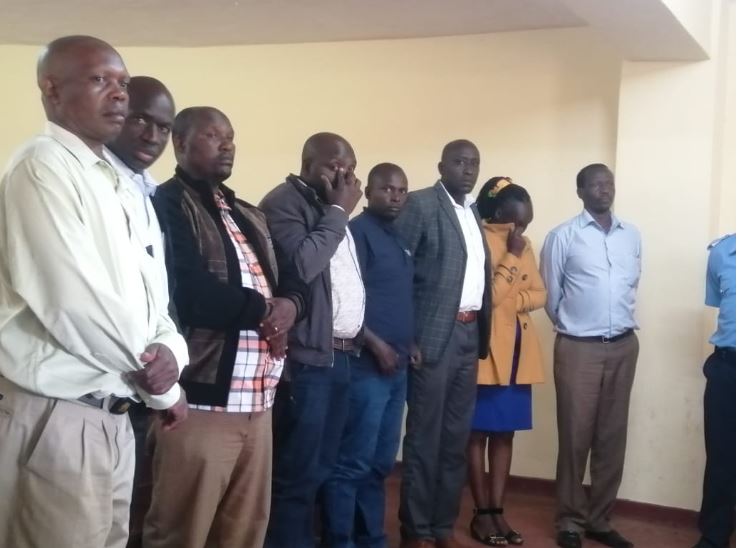 Eight former employees of the Kericho County government have been sentenced after being found guilty of various corruption charges.

They faced nine counts of various charges of graft, including willingly failing to comply with the procurement awarding procedure and awarding a tender to Jawlink through a Direct Procurement method without following the proper procurement guidelines.

Chepkoech, who is also the Director of Jawlink, was acquitted of Count four.

“On April 10, 2016, being a Roads Inspector of the County Government of Kericho, you willfully failed to disclose your private interest as a Director of Jawlink Logistics,” read the charge sheet for count four.

She was sentenced for counts five, six, seven, and eight.

Koskey was convicted of three counts and sentenced to eight years in prison or pay a fine of Sh1.3 million.

In counts six, seven and eight, Chepkoech was convicted jointly with Kimutai and Kipgenoh.

They were sentenced to four years imprisonment or pay a fine of Sh2.4 million each.

Cheruiyot, Mambwai, Chirchir, and Njoroge were convicted of failure to comply with the procurement awarding procedure and awarding the tender to Jawlink on March 9, 2016.

Chief Magistrate S M Mokua sentenced them to two years in prison or a fine of Sh300,000 each.

Man Dies After Collapsing in City Gym; Woman Found Dead After Weeks of Fasting < Previous
Here are the Trending Memes and Tweets This Wednesday Next >
Recommended stories you may like: