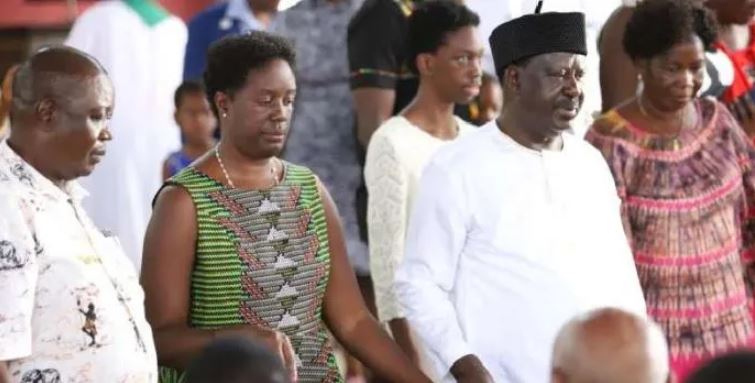 ODM leader Raila Odinga has described his daughter Rosemary’s journey to recovery as one of faith and resilience.

The presidential contender last week accompanied Rosemary to India for a check-up on her eyesight.

He recounted her three-year journey to regaining her eyesight, noting they tried specialised treatments in four countries without much success.

“My daughter got sick three years ago. She had a brain hemorrhage. She was operated on in Nairobi and in the process, they interfered with her optic nerve,” Odinga said.

“We transferred her to South Africa and was treated for three months but she, unfortunately, was not able to recover her eyesight. We sent her to Israel but again they did not do much.

“We sent her to China and they did another surgery on her but it did not help her regain her eyesight,” he added.

Raila said they also tried Germany but the outcome was the same. They were on the verge of giving up before a friend referred them to an Indian hospital that specialises in a traditional Indian treatment called ‘Ayurvedic’.

“A friend of mine came and suggested that that there is an institution in India that does Ayurvedic treatment that you should try. We decided to try and sent her to this centre in 2019.

“She(Rosemar) stayed there for three weeks in which they treated her. They discharged her and said she should stay for continued medication where they administered eye drops and massaging for three months after which further tests would be conducted,” Raila recounted.

Back in Nairobi, an eye specialist conducted tests that established there were noticeable improvements.

“After the three months in December that year, they called me and told me to take her to a test in Nairobi and I took her to a specialist who conducted the tests and said there was a substantial improvement in her eyes,” he said.

“He prescribed some glasses and said that she could see. When we ordered the glasses, she could see and called me in amazement.”

“This is really a big surprise to me and my family that my daughter was able to regain her sight again,” Odinga said, expressing his gratitude.

“She was supposed to return for a review in early 2020, but COVID broke out, and she has been waiting for the last two years until we were finally able to come last Monday.”

Everything Trending in Nairobi This Tuesday < Previous
Magoha Clarifies Directive on Gay Students, “I’m Not Against Homosexuals” Next >
Recommended stories you may like: