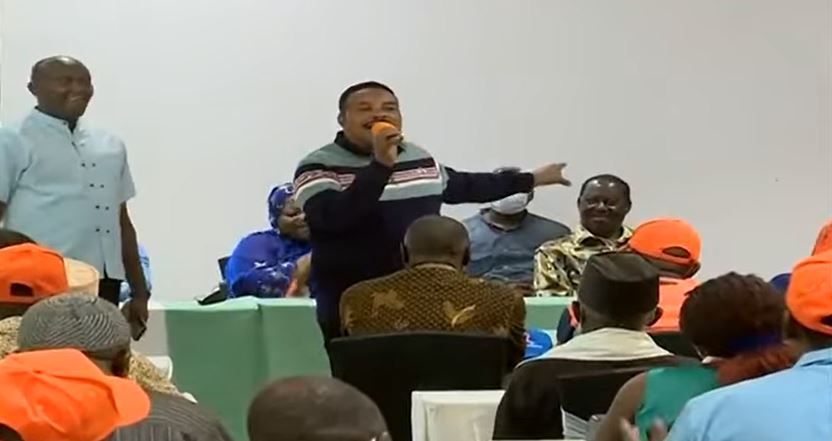 The popular vernacular musician Ben Githae appears to have composed a new tune for the campaign season, and this tie, he is singing for ODM leader Raila Odinga.

Despite getting a lot of stick for composing the song ‘Tano Tena’ for President Uhuru and DP Ruto, Githae has remixed the same song to sway his listeners to vote for Odinga in 2022.

Ben Githae sang a snippet of the new tune on Tuesday during a meeting held by Royal Media Services owner S.K Macharia.

Githae changed the tune slightly in praise of ‘Baba’ and his quest of conquering Mt Kenya.

“Your excellency, I am Ben Githae. I’m the same person who composed Tano Tena and Wembe Ni Ule Ule but now I have changed the song. The lyrics state as follows: ‘ndani ndani ndani…to the State House… mlima wote… Baba tosha’,” Githae said as he asked the delegates to join him in singing the tune.

The new song comes weeks after Githae said he would only compose a song for Raila if President Uhuru Kenyatta endorses him.

“I am a staunch supporter of Uhuru, if he says I support Raila, I will support him,” Githae said.

Watch Ben Githae sing his new tune for Raila below.

Husband of Slain Olympian Agnes Tirop Pleads Not Guilty < Previous
‘Bottom Up Idea is Mine’…Businessman Sues DP Ruto Over Slogan Next >
Recommended stories you may like: