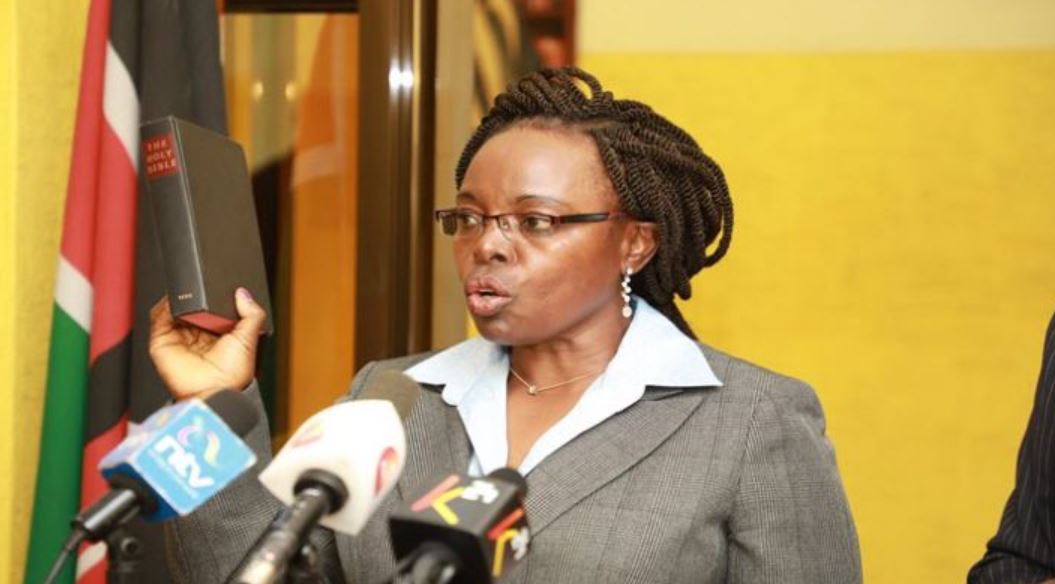 Margaret Nyakang’o, who is an accountant and a financial manager, was nominated as the Controller of Budget on 18 November 2019.

She became the second person to serve in that capacity since the office was established.

Own-revenue collection by counties is still low and a majority of them hardly met their targets. Moreover, accountability for these monies is still weak. I wonder if your office has any way to confirm that whatever the counties declare is the right figure. What measures, in your view, can help raise the local revenue levels for counties and also improve transparency in reporting? Donald Mabonga, Kajiado

Own-source revenue (OSR) performance by the county governments has been rather low when compared with the annual targets. In FY 2020/21, the counties targeted to collect Sh53.66 billion but realised only Sh34.44 billion, a performance of 64.2 percent.

In the recent past, low performance in OSR collections may have been occasioned by disruptions occasioned by the Covid-19 pandemic. Other reasons include weak revenue collection systems and internal controls, and failure to define the OSR streams. For example, failure to update property valuation registers has hampered some counties’ effective collection of property rates.

To improve OSR performance and transparency in reporting, my office has recently partnered with the United Nations Capital Development Fund (UNCDF) and the Tax Administration Diagnostic Assessment Tool (TADAT) secretariat to train my staff on how to assess the health of critical components of a county’s tax administration system and its level of maturity in the context of good international practices using the TADAT tool.

TADAT assessments identify the relative strengths and weaknesses in tax administration, facilitate a shared view on the condition of the tax administration among all stakeholders and help set the reform agenda, facilitate management and coordination of internal or external support for reforms, monitor reforms, and evaluate progress. Already, eight counties have undertaken TADAT assessments, with plans underway to assess more this financial year.

Other initiatives such as developing an Integrated County Revenue Management System for use by all the county governments will go a long way in enhancing transparency and uniformity in reporting by the counties.

The coming General Election will certainly disrupt the budget cycle for FY 2022/2023 in all government agencies in all aspects. What budget tracking, monitoring and evaluation interventions do you plan to deploy to check against massive looting and diversion of public funds over the campaign period? Dan Murugu, Nakuru

The budget calendar for FY 2022/23 was revised, and we expect to have the approved budgets for both levels of government in place by April 5, 2022. This was necessary to ensure that the General Election does not adversely affect the budget formulation process.

As mandated by the constitution, my office will continue to oversee budget execution during the campaign period by ensuring withdrawals from public funds are in line with the law.

Our vigilance will remain high, and we will ensure the prescribed systems, such as the Integrated Financial Management System (Ifmis) are strictly used. The use of these systems will enhance the visibility of financial transactions and deter looting.

The law provides that public funds not be utilised outside the budget approved by Parliament. My office must be satisfied that all expenditure is within the approved budget.

Further, I expect other government agencies with oversight responsibility in monitoring the use of public funds to deploy their systems to deter any possible misuse. My office will be at the forefront in pointing out any instances of misuse of public funds for the attention of investigative agencies.

Since 2013, nearly all county governments have been spending more money on recurrent expenses and very little on development, something that has negatively hampered service delivery in key sectors like health, roads and education. How is this matter being addressed to ensure that Kenyans get value for money? Dan Murugu, Nakuru Town

It is true that there has been low expenditure by the government on development budget over the past financial years. This issue has been consistently highlighted in the Budget Implementation Review Reports I submit to Parliament quarterly. The law requires that at least 30 per cent of the budget is allocated for development programmes over the medium term.

My office has consistently recommended that recurrent costs, particularly personnel emoluments, be at legally acceptable levels to ensure that funds are available for development programmes. Further, we will follow up with the Public Procurement Authority to enhance spending entities’ capacity to develop workable procurement plans that prioritise expenditure on development programmes.

Supplementary budgets have become the new way for county governments to defeat scrutiny and set ceilings. By the end of a financial year, the actual spending is usually completely different from the original budget. Madam, is there a way the law and your office can control supplementary budgeting? Joel Kariuki, Rongai

Supplementary budgets are allowed under Article 223 of the Constitution and Section 135 of the Public Finance Management Act, 2012. These provide the opportunity for a government to revise a budget to accommodate unforeseen expenditures, take on new revenues, or correct an inadequate allocation. But the law prohibits supplementary budgets from introducing new projects outside the county’s Annual Development Plan.

To ensure that supplementary budgets adhere to the law, my office regularly undertakes reviews of the same to ensure that they do not significantly deviate from the original budgets.

One of the CoB functions is public sensitisation, but in a number of counties, the public does not know the functions and existence of your office. What is your take on this? Jeff Chepkwony, Chepalungu

To a large extent, the office of the CoB discharges the sensitisation role. A recent customer satisfaction survey conducted by my office confirmed a need for this office to engage more with stakeholders and increase its presence in print media and television.

Meanwhile, my office regularly prepares and distributes quarterly, annual, and special budget implementation and review reports to the Legislature and the Executive. These reports are also distributed to the public countrywide through Huduma Centres and uploaded on our website www.cob.go.ke. The reports are also widely covered by the newspapers, radio, and television. I encourage the public to read our reports.

To some extent, however, some members of the public may not clearly distinguish the different roles that the Controller of Budget and other oversight institutions play in the management of public funds.

To address this, my office has organised several public participation forums to promote citizen participation in the budget process, enhance the understanding of the budgeting process, and partner with the public in monitoring the utilisation of public funds as required by law.

For more than a year, most government services were literally at standstill due to the Covid-19 protocols. However, media reports indicate that despite this, travel expenses by government officers were still high. How was this possible and how did they get approvals to spend these funds? Komen Moris, Eldoret

The media reports on high travel expenditure were picked from my office’s quarterly budget implementation review reports. My office questioned the public entities that reported high expenditures during the pandemic.

Considering the circumstances during the period, it is highly likely that some expenditure may not be genuine. I, therefore, expect the Auditor-General to pick this issue later in the year during the audit of the financial statements for the period to shed more light that will facilitate appropriate action.

Both national and county governments’ rate of absorption of development funds has been worryingly low. What causes this, and why has it not been resolved? Brian Ooko, Nairobi

In the 2020/21 financial year, absorption of development funds stood at 79.5 percent for the national Government and 62.1 percent for the aggregated county governments. Conversely, recurrent expenditure was 91.5 percent and 89.5 percent, respectively.

Madam, once your office approves budgets for county and national governments, under what circumstances can the actual expenditures exceed the budget amounts, and by what levels is this allowed, if at all? Hassan Ali, Malindi

The OCOB does not have the legal mandate of approving budgets for the National or County Governments. Parliament and the County Assemblies approve the budgets. The role of the OCOB is to provide advisories on the budgets and monitor budget implementation. The OCOB performs the oversight role by approving requests for withdrawals from public funds and reporting to Parliament and County Assemblies every quarter.

My office has noted instances where expenditure may exceed budget amounts. These include instances where an entity generated Appropriations-in-Aid (A-i-A) that was not budgeted for or spent own-source revenue at the source.

Ideally, expenditure should never exceed the approved budget allocations. Exceptions under Article 223 of the Constitution and Section 135 of the Public Finance Management Act, 2012 are however allowed and adjustments are then made during the supplementary budget. These exceptions should be regularised through parliamentary approval before the closure of a financial year.

Any expenditures above the approved budget are, therefore, illegal.

What happens in cases where, by the end of a financial year, a county gets less than the budgeted transfer from the national Government? Can the balance be paid in the subsequent financial year and how would it be accounted for? Josphat Mulinge, Makueni

Upon approval of the County Allocation of Revenue Act (CARA), the Senate approves a Cash Disbursement Schedule which guides disbursement of funds to the Counties by the National Treasury. Allocations should typically be disbursed in full each financial year. In cases where this does not happen, the counties are still entitled to the balance.

Further, Section 136 (2) of the Public Finance Management Act, 2012 provides that any unspent money shall be refunded to the County Revenue Fund Account at the end of the financial year.

Accordingly, any unspent balance by the end of the financial year is available to the County for budgeting in the subsequent financial year, through a supplementary budget.

Over 25 YouTuber Lorna Muchemi Shares her WEDDING Story (PHOTOS) < Previous
Hilarious Tweets by Kenyans on Twitter for your Monday Blues Next >
Recommended stories you may like: