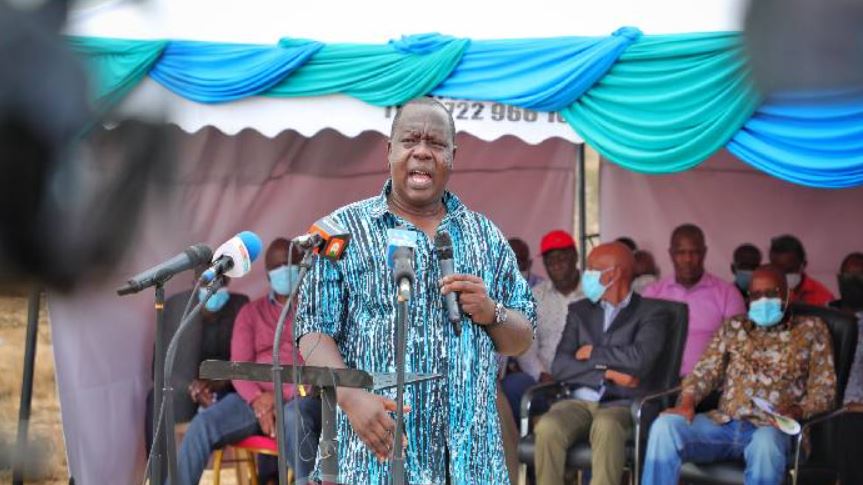 Interior Cabinet Secretary Fred Matiang’i has assured Kenyans that the prices of fuel and electricity will be reduced.

Speaking on Sunday during a funds drive for the proposed Seventh Day Church headquarters in Isinya, Kajiado County, CS Matiang’i said the government will this week launch an aggressive programme to address the high cost of fuel and rising electricity bills.

Dr Matiang’i will chair the crisis meeting with stakeholders in the energy sector with a view to implementing the findings contained in the report of the presidential task force on the review of Power Purchase Agreements (PPAs).

Matiang’i, who is also the chairman of the National Development and Implementation Committee, said he would ensure that the recommendations of the task force are implemented.

The ‘super CS’ indicated that an overhaul of scandal-ridden Kenya Power will top the agenda.

“In light of the changes at the Ministry of Energy announced by the President we shall this week start an aggressive programme to reduce the cost of fuel and electricity,” he said.

“With these planned changes, we are certain that prices of fuel will not only come down but even bills and cost of electricity that we’re paying will also come down,” Matiang’i added.

Matiang’i noted that Kenya had lost both local and foreign investors to neighbouring countries due to the high cost of power.

He said, once implemented, the proposed reforms by a task force appointed by President Kenyatta will be a game-changer and will see profit margins of locals firms go up.

Matiang’i’s assurance comes a day after ODM leader Raila Odinga told his supporters in Bungoma town that the government will reduce the prices of fuel this week.

Gambling Hours to be Limited in New Law < Previous
Cardi B Tweets VIDEO of Kibaki Making His Famous ‘I Have One Wife’ Proclamation Next >
Recommended stories you may like: