Boniface Mwangi: Why I Suspect Governor Mutua Bombed my House 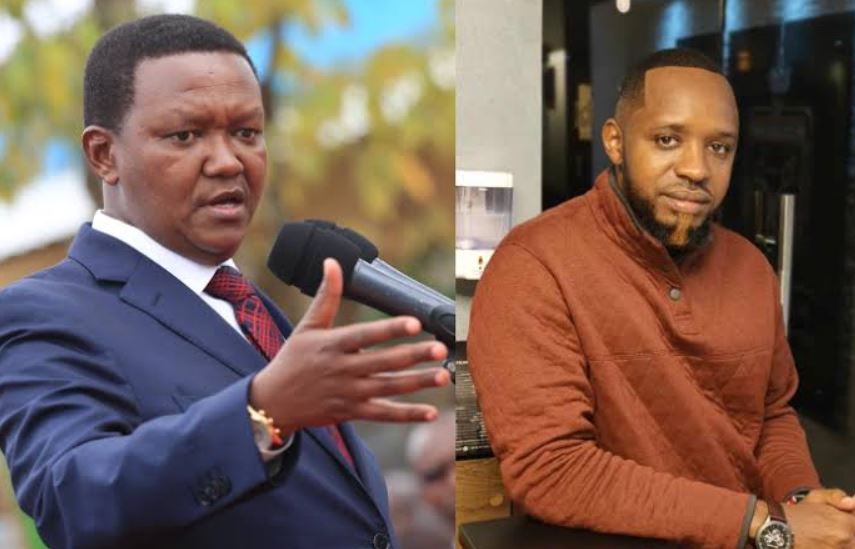 My family is afraid because of the bombing of my house. Y’know, no one comes to lay explosives in your house as a sign of greetings. They are not coming to say ‘hi’. People who walk around with bombs and guns don’t do that to hand out candies. They hand out bullets and bombs and death.

So will I have to tear down the whole house, whose construction began in July 2020? That will be decided by structural engineers, but there’s one room that is kaput. There are three major cracks on the entire building. The assailants put the explosives in the drainage pipes, so, the kitchen is entirely cracked.

The foundation of the house is very good, which is why not much damage was done. They were putting explosives underneath to crack the foundation. Once the foundation cracks, the house is gone. Also, there was some luck because not all the detonators went off. I don’t know how many didn’t blow up because when the police bomb squad came they told us to move away from the scene.

And I wonder: what if the construction workers were sleeping in that house? Much as the house is incomplete, workers spend time there sometimes. It could have been worse.

By the way, when Isaac, one of the workers, first called to report, I thought it was just a person who had had one too many reporting a petty theft. It was a holiday, you know. And I had just come from an Eric Wainaina concert.

The farm (in Lukenya) is at quite a remote place, eight kilometres from the road. There isn’t much of a road there. It’s a very dusty, hidden place on top of a hill.

At first I told Isaac, ‘Okay, we’ll talk tomorrow.’ It was until they told me the house had been bombed; that it was cracking, that I was jolted. They even sent me videos. That’s when I lost my mind and I uploaded a video online.

Do you want to know why I suspect Machakos Governor Alfred Mutua had a hand in this? See, the governor has separated from Lillian Ng’ang’a. And Lillian’s story is not mine to tell. But the governor is suspected of doing things, or is trying to do some things, to Lillian and Juliani (the gospel artiste, whose real name is Julius Owino and who has publicly declared being in a relationship with the Lilian) — which were reported to the police.

I know the governor knows I am building there (this is no proof of any wrongdoing). When they were still an item, Lillian visited the site with the governor’s security and chase cars. And he knows I’ve been there since 2018. It’s because since 2018 I’ve been tweeting about the road heading there.

And what people should know is that I didn’t know Lillian yesterday. I have known her since 2004. I met Lillian through the late) Ann Kamoni, who was my classmate in journalism school. Ann used to be Raila Odinga’s photographer at some point, having previously worked at the Standard Group. She went to the same school as Lillian. As for Juliani, I’ve known him personally for 11 years. So, combined, I’ve known both of them for 28 years.

And I can tell you that those two people are under a lot of pressure. The reason they don’t want to share all they are going through is that people are mocking them. And Lillian loved the governor; so she can’t go public about it. And it’s not my story to tell.

Some people have been saying I’m defying the ‘bro code’ by sharing photos of a happy Lillian with Juliani; that I’m spiting Governor Mutua by sharing the photos. Anafeelishwa kwa nini, si waliwachana? Why do you feel bad when your ex is happy? What is a bro code, my friend? Does the bro code mean that you’re jealous of your ex when they’re happy?

The reason the Directorate of Criminal Investigations sent a bomb squad to the farm was that there were explosives there. Now, listen: the only people who are trained in this country to use explosives are the Anti-Terrorism Police Unit, Recce Squad and the military. Your ordinary police officers don’t have those things. There is no way that attack was carried out by average citizens.

This is yet another warning of death to me. I often joke that for me, death threats are like a change of weather; they just come and go. So, I hibernate for a while then come back.

I’m not scared of death, but I’m scared of my children’s future should I die, because I believe they will be trolled and they’ll be told that I wished to die. I don’t wish to die. Ideally, I would love to be living my own life, enjoying it without being threatened.

Man, I fought for Nairobi’s Lang’ata Primary School, whose land was about to be grabbed. I fought for Nakuru’s Naka Primary, where there were allegations of land grabbing. The land was worth Sh1.4 billion; it was not stolen. I’ve trained many activists in this country. I’ve helped make title deeds for all schools a policy for the government because of Lang’ata Primary School.

But activism is in my blood and I am helping a lot of people with it. Do you know that I receive more than 100 messages on a typical day? Do you know that even police sometimes want me to help them push a cause or another? I have even got requests for help from some people at State House!

So, you’ll find people asking for help here and there. It can be about rape, murder, abortion —name it. Numerous times, it takes just a phone call for people to get assistance. Like last year, during the lockdown, there was a lady who tried to do an illegal abortion. She was bleeding in the house and the boyfriend contacted me, saying she was in pain and there was nothing he could do. I called someone who took her to the hospital and ensured that she was cleaned up. There are many things that I actually help with that I don’t even put online.

Sometimes a call comes from a tenant who has been told by the landlord that they are going to be kicked out without deposit. I call the landlord, I introduce myself, they get their money.

But you see, I do these in my personal capacity. I don’t work for any organisation.

So, I help a lot and my son has summed it up that people treat me like God: They deny I exist until they need my help. That’s what my son says because I have gone out with him at night to bail out people. Many Members of Parliament in this city call me when they have issues that require my intervention.

I left Pawa 254, the organisation I founded, as I geared up to run for Starehe MP in 2017. But my wife, Njeri, still works there. So how do I make my money? Not by selling ugliness to foreigners as some people often say. I’m a photographer. I also teach. I’m teaching at the European University Institute.

I quit politics a few months ago. I resigned from my position at Ukweli Party to be just a member in order to focus on my family. But that is not to say I will never vie for a position, even though I know for sure that I’m not running for any position in next year’s election.

But I feel sorry for the people of Starehe. I feel so sorry for them, and Starehe is the story of Kenya. In the history of this country, this is the worst Parliament Kenya has ever had. We had better parliamentarians when we were a one-party State.

The ‘Seven Bearded Sisters’ were in Parliament in the 1980s. They were Kanu MPs demanding answers from a Kanu president. Imagine today Jubilee members can’t challenge President Uhuru Kenyatta but in the ’80s Kanu MPs were challenging the president. Even under Mzee Jomo Kenyatta, the likes of Martin Shikuku and Waruru Kanja were challenging Mzee Kenyatta. And they were Kanu members!

Nowadays, it’s who can dance better, or who has the best bling, or who has the biggest car, who gets elected. You are electing tongue-tied people to go represent you and they have no idea what a policy is.

When you are elected to go to Parliament, it’s not entertainment you’re going for. This thing of electing people for looks — slay queens and kings — shows that even progressively, the IQ of Kenyans has dipped very low.

Proverbs 26: 11 says: ‘As a dog returns to its vomit, so a fool repeats its foolishness.’ Kenyans have a way of behaving like dogs. They keep on repeating the same foolishness over and over. We keep voting the same thugs, expecting different results.

Kenyans, don’t be cowards. Read Revelation 21:8, which says: ‘But as for the cowardly, the faithless, the detestable, as for murderers, the sexually immoral, sorcerers, idolaters, and all liars, their portion will be in the lake that burns with fire and sulphur, which is the second death.’

The Bible has put cowards together with murderers and the vile. Don’t fear. In my fearlessness, some people think I’m always this angry person. And I am actually angry. I have so much trauma within myself. I was a witness to the 2007/2008 post-election violence. I have been a witness to many police brutality cases. At The Standard I worked at the crime desk. I used to go and cover those police shootings.

And then, I can see through the lies of politicians because I’ve covered them as a photojournalist, so we know some of their secrets. Then we see them lying to people every day. It makes me very angry. So, yes; I’m angry that my children are growing up in this country. Our children’s present has been stolen, their future is mortgaged. They are born into debt, and right now they can’t even exist.

I’m angry that injustice is a way of life every day. Extra-judicial killings never get resolved and suspects are never apprehended.

We must address political murders. Because if tomorrow I’m killed, it will be a political murder. And they will say ‘no stones will be left unturned’ but they’ll never turn any stone.

Joanna Stutchbury, the Kiambu-based environmentalist, was murdered in July. The President even issued a statement. But have the murderers been arrested? No. That is a big problem that Kenya must address because it means that people can decide that instead of reason, they will send assassins.

I’ve gone through everything. I’ve been shot, I’ve been beaten. I still even have the wound from last week at Pension Towers in Nairobi. I have so many scars on my body. No one likes scars. Do you think I like being beaten?

My parting shot would be the words of Francis Imbuga, a Kenyan playwright who died in 2012. He once wrote that when the madness of an entire nation disturbs a solitary mind, it is not enough to say the man is mad.

And I think the political class would like to push me out because they can’t stand my guts and they can’t stand the truth. But I don’t want to go. I want to be here. And I really don’t have a death wish. My family would never forgive me if I’m killed. They’ll be broken forever.

And for those who don’t have a voter’s card, go get one. It’s still important to choose among the pigs the least-smelling one.

List of Nairobi Clubs That Sell The Most Alcohol < Previous
Family Refuses To Bury Serial Killer Masten Wanjala’s Body Next >
Recommended stories you may like: