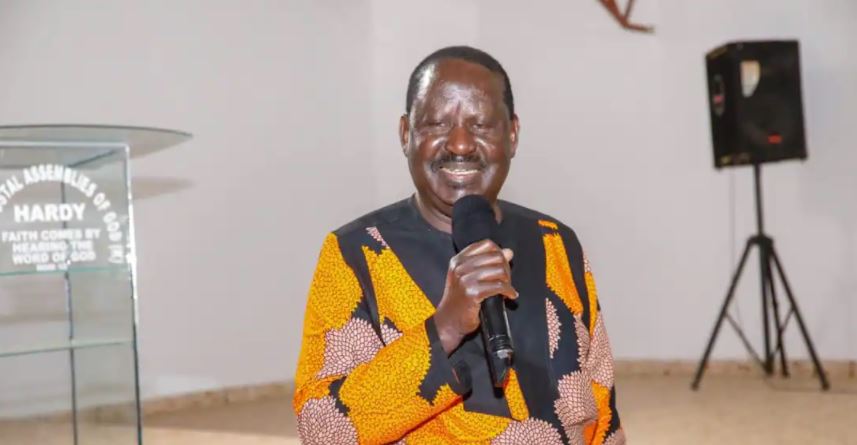 Raila Odinga has reiterated that he is a staunch Christian in response to his critics linking him to withcraft.

In an indirect message to Deputy President William Ruto, who often refers to Raila as a mganga(sorcerer), the ODM leader said he had been through a lot not to believe in God.

“We have walked a long journey to date because of the grace of God. We thank God for all he has done for us. Some people say Raila belongs to the devil, eti Raila ni mganga (that Raila is a sorcerer) I want to tell them that I am a Christian, a member of the Anglican Church,” said Raila.

Odinga spoke during a Church Service at Hardy Pentecostal Assemblies of God (PAG) in Karen, Nairobi.

The former Prime Minister cited his political detention as one of the obtacles that God saw him through.

“I have been put into detention, tortured – put in some sort of a hole, I had only one hour in 24 hours to see the sun.

“I was in darkness all the time and we were only allowed to take out excreta in the morning before being locked up again. I stayed that way till my eyes were affected and that’s why I have a problem with my eyes,” he said.

Raila recalled how he was tortured and his wife Ida arrested on several occasions…but we overcame those because of the grace of God,” he said.

Odinga told the “holier-than-thou” that God saved his life during the entirety of his nine-year-detention.

“I know what it means to know God because I have passed through several challenges that without God I would not have succeeded.”

Earlier this year, Raila also told off his political opponents who were questioning his faith.

“I believe I am alive today because my God lives and walks with me and I seek to walk with him,” he said.

On Sunday, Raila reiterated his commitment to serve God in his quest for a united country.

Waiguru Speaks on Possibility of Joining UDA < Previous
The Trending Memes and Tweets in Nairobi Today Next >
Recommended stories you may like: