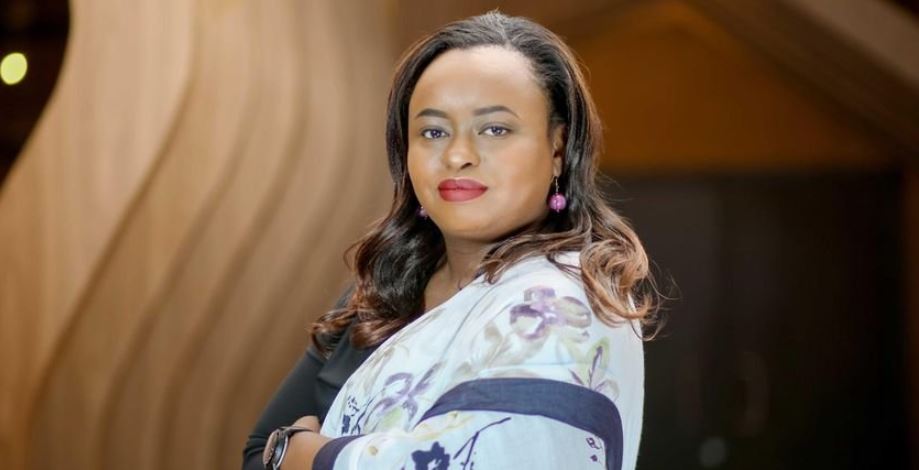 Kui Kinyanjui is the head of Regulatory and Public Policy at Safaricom PLC. She holds a Bachelor of Arts degree in Digital Journalism from the University Of Massachusetts – Amherst.

The 42-year-old shares her career path with the Sunday Nation.

I am a single mother to an amazing and intelligent young lady. I’m lucky that I knew exactly what I wanted to be at the age of ten when I decided to become a journalist. At the time, I imagined I would be the next Christian Amanpour on CNN, chasing stories all over the globe, living out of a suitcase, and covering wars while looking ruggedly glamourous in a leather jacket and jeans. But then, as I grew up, I realized the attractions of the relatively less dangerous but equally aggressive world of business journalism.

I grew up in Nairobi in the 80s and 90s and was fortunate to have parents who were willing to invest in my education. They believed that education was the key element that would enable me to do whatever I wanted in the future.

Being the last born of five children, I had the luxury of enjoying their indulgence in my career choices. And as the age difference between my siblings and I was significant, I grew up pretty much by myself and, as a result, developed a strong love for the world of books. This love morphed into a passion for telling stories, and I like to think that’s shaped my career choices.

I attended Peponi Secondary School where I completed the International General Certificate of Secondary Education (IGCSE) in 1995. I then proceeded to The Madeira School in Virginia for a High School Diploma and graduated in 1997. After high school, I joined Fordham University for two years but had to leave due to personal reasons. I  would later join the University Of Massachusetts – Amherst to complete my Bachelor of Arts in Digital Journalism in 2017.

After university, I started by writing freelance articles for airline magazines on travel, leisure, and book reviews. I knew that getting a job would be tricky, so I threw my articles at every publication I could think of, even as I looked for a formal job.

After about a year after freelancing, I landed my first job at Executive Magazine, which was at the time a leading business magazine. I was earning Sh10,000 as an intern but was paid for any of my articles that ran in the magazine.

Unfortunately, six months later, the magazine folded, but I was lucky to find a job at PC World East Africa magazine. Initially, it was a sales job and was probably the most challenging job I’ve ever had to sell advertising in the newspaper. Sales are hard! I was earning Sh15,000 at the time and still pushing my articles to the magazine where I could.

Incidentally, soon after I joined, my editor fell ill and was unable to continue with her duties, and I was asked to stand in for her role as editor of the magazine. I was eventually confirmed into the role, which I held for the next four years.

Due to market forces, finally, the publisher decided to fold the magazine, and I found myself jobless once again. This is when I decided to transition into the world of public relations, and I had the opportunity to work at Ogilvy PR.

Due to my lack of experience in the field – and the fact that jobs are hard to find – I took the only role they had open at the time, joining as an intern. Eventually, I got a formal role and helped manage various accounts such as Africa Online, Coca Cola, and GlaxoSmithKline.

Because of my previous experience in the business and technology fields, I was then headhunted to join Nation Media Group’s Business Daily, where I worked for five years.

I was then invited to take up a role to work as part of a global communications team at IBM before I joined Safaricom (for the first time) as their Head of Corporate Communications, a role I held for four years.

I left to join Wikimedia in San Francisco, where I was Vice President for Communications, and while there, I started to engage in the world of tech policy development. In 2019, I returned to Safaricom to head the Regulatory and Public Policy team, where I currently work.

I lead a team of experts who are working on providing the framework for Safaricom to do what it needs to do. This means we look at what is happening globally and locally and analyze the impact on Safaricom from a policy and regulatory perspective.

This helps to inform the company’s day-to-day decision-making. We also work to secure various licences and resources that the company needs and maintain critical relationships and partnerships with relevant stakeholders across multiple sectors in Kenya.

What is the most memorable thing about your career journey?

You can never stop learning. Flexibility is key. You may start in a certain area, but if you are willing to learn and take time to learn a new field, you can build an interesting career that continually advances as your interests evolve.

For instance, I would never have seen myself working in corporate communications or even policy when I first started. Still, now it makes perfect sense because of the progression of my past experiences.

What has been the key driver of your career growth?

Emotional intelligence is one of the most important skills to build in life. It can make or break your life. Secondly, qualifications aren’t everything. School teaches you how to learn, but if you can take that ability and apply it to your work, the possibilities are endless. An engineer can become a sales director; a doctor can become a marketer; a carpenter can become the CEO. You have to be willing to put in the work. There is no substitute for hard work.

Who would you single out for playing a key role in your career growth?

I won’t name names, but I have been privileged to work with very transformative leaders who have instilled their values in my work all through my career. My advice to young people is to look for a business leader who pushes you to become the best version of yourself both inside and outside the office. One leader taught me the value of being a good person and being the person I would want to work for.

I try to not focus on how much money I am making in a job. Instead, I focus on the impact my work has on the organization and how that work can create more opportunities for me to expand my skill set. If I am not enjoying my work, I will look for a new opportunity because I am probably taking up a space meant for someone else, and I am also not building my legacy. If you find the right job, then you’ll never work another day in your life.

Don’t shy away from the limelight.

What would you advise the youth in Kenya and Africa?

Think globally. The world is changing rapidly, and a great deal of that change is being driven by technology. The world is also shrinking, so that means there is no reason to build an application that works for Kenya. It can’t also work in China.

If you do not move with those changes, you run the risk of becoming irrelevant. In a world where we have so much access to online information (most of it is free), there are boundless opportunities to learn about these shifts and position yourself to take advantage of them.

I would also urge them to remember that you are the author of your own story. Every decision you make will either progress or delay your vision. You will suffer many setbacks, but every day you have the opportunity to write a new chapter in your story.

I hope to continue to merge my skills with the ability to create more access for others to opportunities, which means making a tangible difference in the lives of the underprivileged to transform their lives. I once tried my hand at being an entrepreneur and got severely burned, so maybe I could revisit that dream at a later point.

What is the one thing you are proud of in life?

I’m most proud that I have been able to maintain my integrity throughout my career. This is highly important to me. I like to be able to sleep at night without worrying if someone will take everything away. While that can happen through redundancy or other events, I would be highly disappointed if it happened because I cut a corner or did something unethical. That’s not the legacy I want to leave my daughter.

What is your biggest fear in life?

Aside from a global shortage of chocolate? Maybe becoming irrelevant and not being able to keep pace with change.

If there is one thing, you could change from your past, what you that be?

I wouldn’t change a thing. Everything – good or bad – has come together to make me the person I am today. The dark days have contributed to my growth, even if I didn’t think so at the time.

What would you want to be remembered for?

Being a great mother and a person who helped people to be their best.

From Hawker to Founder of ‘Sung Timber’, Meet Linnet Kathambi < Previous
How I Became Managing Director at AIG Kenya Insurance Company Next >
Recommended stories you may like: