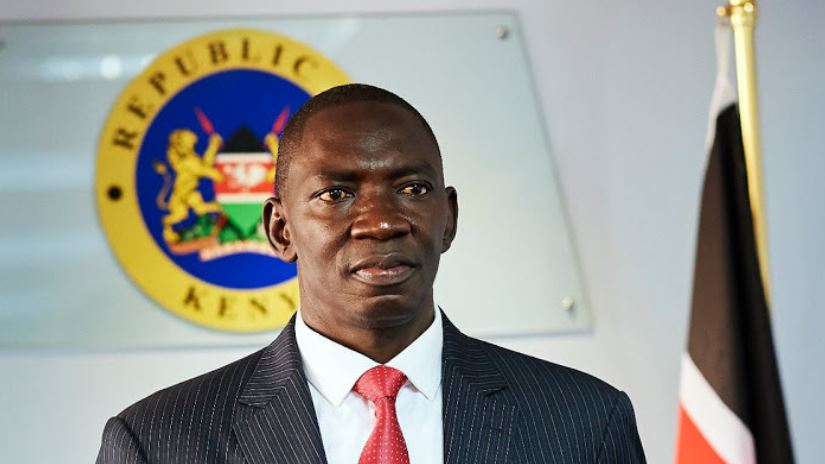 Days after Kenya’s energy regulator EPRA hiked fuel prices to a nine-year high, government spokesperson Cyrus Oguna rubbed salt into the wounds of Kenyans who continue to decry the high cost of living.

While responding to the outrage over the rising fuel costs and increased taxation, Oguna in a press briefing on Tuesday, March 16 told oppressed Kenyans to stop crying and support the govt instead.

“Let us not cry all the time. We should ask ourselves what we’re doing to help the government,” he said.

“I can tell you this, the amount of taxes people pay in Europe is nothing compared to what you’re paying here, you shouldn’t be crying,” he said.

“So, we’re crying when we shouldn’t be crying. We should be standing firm and say that this is our government, we will support it. That’s all I’m asking each one of us. Let’s stand firm and support our govt… let’s not cry all the time, sawa sawa?” Oguna posed condescendingly.

Fittingly, Kenyans were left fuming and took to social media platforms to berate Oguna for his exasperating remarks.

Below is a video of Oguna and some reactions.

“The amount of TAXES people pay in EUROPE is nothing compared to what you’re paying here, you shouldn’t be CRYING”

Govt spokesman in response to your outrage over rising fuel prices. pic.twitter.com/x8ohPipx1p

The kind of service delivery and infrastructure people enjoy in EUROPE is nothing compared to what we enjoy here, we cannot even afford to cry.

If they can compare how we are taxed with those European countries, why should they not compare how they are providing vital services, dealing with corruption, and improving the lives of common wananchi?

Someone tell Cyrus Oguna that those countries he is talking about have a stable economy , they value their citizens enough to provide great public services , better healthcare plan and better money circulation , and they are not being auctioned for debts that were stolen !!

So Cyrus oguna showed us the middle finger is okay…..

Cyrus Oguna is just a messenger but even so, he should be moderate in his speech and refrain from ridicule. It’s painful enough that there’s no cash flow in kenya but when government spokesman calls upon Kenyans to be happy and smile about that. Know we headed to deep shit.

Cyrus oguna is the most stupid person to have listened to this yr.. Lazy brat who got no inkling on what wringer they putting us through

Remember when Cyrus Oguna tried to be friends with common sense? pic.twitter.com/7jM7MMtVUD

Cyrus Oguna likening us to Europe? Just have a look at the Official Squad against our men’s wallets. Then dude wants us to pay more? Better kill us! ? pic.twitter.com/gHHpIHBWCn

It seems that we’re not in the same Kenya with our learned friend Dr Cyrus Oguna. The government of the day is laughing at its people when they are suffering but only God will intervene and come to our plight pic.twitter.com/jAlQWirevf

Sometimes silence is golden. Cyrus Oguna comments are tragic No citizens like tax ⬆️ but are willing to accept, IF they see the effect. But when taxed through the nose to service non performing loans that have been looted & sustain elite lifestyles, sorry, but no smiles there

Apparently most Europe countries volunteer to pay taxes but in Kenya, Cyrus Oguna is putting it on our necks when services doesn’t equal the taxes we pay.

The Gov’t has failed ,this how Cyrus Oguna Expects Kenyans to Rejoice For High Taxes.. pic.twitter.com/bPuN5lVGwy

Cyrus Oguna:
Support us tuendelee kuwatesa, it is for your own good!

It’s high time we understand that nobody cares about us because every time they come on board , they try to defend the pin in the ass of Mwananchi. Cyrus Oguna is here uttering some shit gyrated with man butter .Where does he get this temerity from? pic.twitter.com/7FfsxtvonI

Cyrus Oguna should not compare us with developed countries. He should know bad leadership, corruption and bad debts are the reasons why we are in this mess in the first place. Europe is Europe, bure kabisa!!!

What kind of madness and stupidity is this? The government cannot account for our taxes and this idiot turns up to tell us shit. #TheEarthIsHard https://t.co/1ZXmve4TgV

If some of these people resign rather than support this pathetic government, would they die? Cyrus Oguna has made one of the most silliest and insensitive statement any government official in the history of Kenya has ever made. Unbelievable! https://t.co/a3WYPqJ5Ma

The comparison ????
You want us to help with taxes but you don’t need help in looting a third of the budget ?‍♂️ https://t.co/MQHqJ9wPp3

You’re an idiot @SpokespersonGoK and you should be embarrassed. Also, these European countries you just compared us to, is GoK at the same level of service delivery? Ama ni wizi tu? I don’t get it, why would you be so comfortable being so publicly obtuse? ??‍♀️ https://t.co/NuHi9rfU5E

In case you think you need more proof that our government really doesn’t care about us, here it is. https://t.co/2xYIBaoUIl

Is it just me or these people who are quoted to be intelligent often look dumb almost all the time?

How can one confidently compare Europe where systems work, wages are really good, Healthcare works, etc to our country where taxes are lining people’s pockets.

I would like to know which economy in Europe we’re being compared to. This is utter rubbish! https://t.co/TcqZdyelGQ

The Government is OFFICIALLY saying “We will fuck you however we want, whenever we want and there isn’t a thing you can do.” And they are right. https://t.co/6yws8MCMXG

This is how you know these people are truly out of their minds. What people are angry about is the wanton thievery of the taxes we pay. Compare outcomes, not amounts, and focus on the fact that we basically get robbed a quarter of our incomes to support thieves. This is trash. https://t.co/boY8Wp5tQ8

Nothing on the internet will annoy you more than this today https://t.co/yOtecT77LR

The Audacity when you have a Well paying Salary. NKT ??‍♂️ I am fool, We are fools for taking all this shit from GOK. https://t.co/jxXNcDL8fn

When you live lavishly on public funds, this is the arrogance you portray. European countries don’t lose Kshs 2B daily to corruption. Their taxes work for them. Comparing Kenya to Europe is so stupid. https://t.co/ai32uEb3eB

Do these people know what people are going through huku nje? he is speaking at a privileged point of view ban. https://t.co/B3GLE3Da2H

,You are paying less in taxes than Europeans pay. Therefore shut the fcuk up about rising fuel costs.’ ? https://t.co/SctUyc4Hta

Fuck you and I cannot emphasise enough eat a donkey dick. Hell is he talking about while eating those taxes https://t.co/vwK01xfdMt