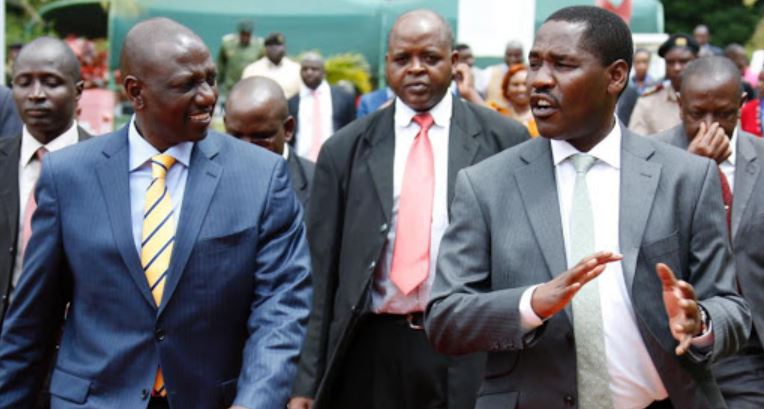 Agriculture CS Peter Munya refuted claims by Deputy President William Ruto that a section of leaders was diminishing President Uhuru Kenyatta’s profile to that of a Mt Kenya leader.

The two leaders appeared to clash during the burial of Thika MP Patrick Wainaina’s mother in Gatundu on Tuesday.

In his speech, Deputy President William Ruto said it was unfortunate that some politicians were branding the President as a tribal leader.

“The president is a leader of the whole country. I beg you as citizens and leaders of Mt Kenya, do not take the president away from us.

“If you say President Kenyatta is the leader of this (Central) region, then who is our leader?” he posed.

Noting that he has never considered himself as the leader of Rift Valley but a servant of all Kenyans, Ruto asked leaders to shun tribal politics.

“When we plan for the country’s development let us plan for every single Kenyan,” he said.

Adding: “We cannot allow the country to go back to the politics of tribalism; we want to work together and move the country forward.”

But Munya, who delivered a condolence speech on behalf of the President, disagreed with Ruto.

“We have never claimed the President serves Mt Kenya Region alone. The President is the leader of the whole country. Just the way he carries development projects across the country, he also develops Mt Kenya region” Munya said.

The Agriculture CS also reprimanded some of the DP’s supporters who walked out of the event in protest of a CS reading the President’s speech.

“This is a very solemn ceremony. If you respect others, you will also be respected. If you humble yourself, you will be exalted.

“With a lot of respect to everybody here including the DP, this is a very solemn occasion where we are giving the last respects to one of our friends. I was sent by the President who has a right to choose who he assigns whatever functions he wishes,” said Munya.

It’s 30 Years In Prison For Man Who Chopped Off Wife’s Hands < Previous
All The Trending Images This Wednesday Next >
Recommended stories you may like: