Churchill Show Is Back For Sh5000 A Ticket 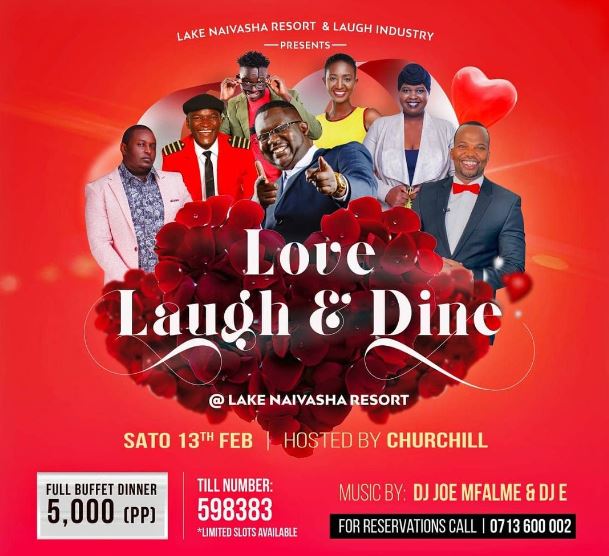 The stand-up version of the popular comedy show Churchill is set for a highly anticipated comeback this Valentine’s weekend.

Organisers have announced the show will be filmed at Lake Naivasha Resort on Saturday, February 13. Tickets for the Churchill Show are going for Sh5000 per person and are also said to be limited.

The event is targeting individuals who will be spending their valentines in Naivasha and its environs.

Due to COVID-19 protocols and the need to observe social distancing, only 600 people will be allowed to attend the event.

There will be nine performers among them MC Jessy, Mammito, Jemutai, Captain Otoyo, MCA Tricky, and Terence creative. The show will also be aired on NTV on Sunday, February 14.

“There will be about nine performers at the event. We are looking at not more than 600 people. You are paying for dinner and entertainment which is Ksh5,000.

“We are presuming that anyone who will book the ticket will be staying at the hotel. The hotel’s capacity is about 100 beds. They also have other nearby resorts,” organizers said.

The last time Churchill show was recorded before a live audience was in March 2020 before the government banned public gatherings.

County Govt To Construct Toilets Along Nakuru-Nairobi Highway < Previous
Churchill: ‘Shika Dream’ Submissions Are Overwhelming But We’re Determined To Fulfill Dreams Next >
Recommended stories you may like: