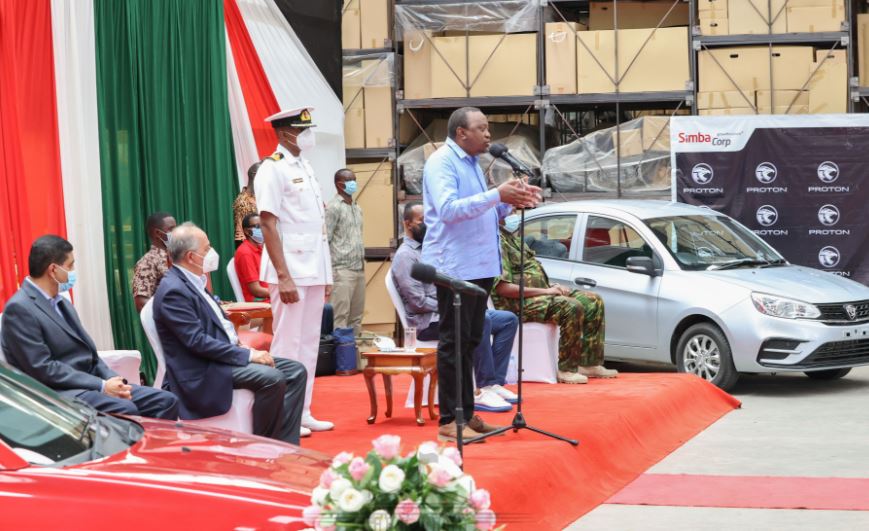 The first project on the President's busy diary was the commissioning of the local assembly of the Malaysian Proton Saga saloon cars at the Associated Vehicle Assemblers (AVA) in Miritini, Mombasa County.

Addressing AVA employees, President Kenyatta applauded Simba Corporation, the Proton franchise holder in Kenya and all other assemblers for supporting the Government’s agenda to revive the local vehicle assembly industry to support wealth and employment creation for the Kenyan youth.

“My joy is that we are commissioning the revival of the assembling of saloon cars in your factory after a 25-year hiatus. With this, we are celebrating the return of saloon vehicle assembly here at AVA in Mombasa and I want to congratulate all those involved,” the Head of State said.

President Kenyatta, who was accompanied by Mombasa Governor Ali Hassan Joho, reiterated the Government’s commitment to revive the automotive industry in Kenya as part of the efforts geared towards achieving the manufacturing pillar of the Big 4 Agenda.

“We want to revive the automotive industry in Kenya. It used to be at one stage that the majority of vehicles that used to traverse
our roads were actually assembled by our own young Kenyans,” the President pointed out.

He regretted that greed and lack of foresight led the Kenyan market to be dominated by used vehicles, a move that pushed local factories to close down leading to loss of jobs.

“Today, we are saying we want jobs to come back to Kenya. We want our young people to be employed through production of goods locally,” the President said.

The President emphasized that the only way to create jobs and strengthen the country's economy was by promoting the "Buy Kenya, Build Kenya" policy.

The second event in the President's diary was the launch of the construction of the Shs 4.5 billion Makupa Bridge in Mombasa County.

Speaking to residents of the area and project staff, the President assured that the Government will continue to roll out transformative development projects across the country.

The Head of State, at the same time, encouraged Kenyans to support the BBI constitutional reform process saying the initiative is aimed at crafting a more united and progressive Kenya.

The sea link, the first of its kind in East Africa, will take up most of the foot traffic by linking Liwatoni on Mombasa island with Ras Bofu in Likoni mainland. This will free up the ferry crossing, which has been in service since 1937, to cater for vehicular and cargo traffic across the Kilindini Channel without disrupting shipping services.

Speaking to area residents who turned up to receive him, the Head of State said the massive Government investment in infrastructure at the Coast and across the country will open up the economy and create jobs for the youth.

“We have agreed with the contractor that from the 1st of January (2021), the bridge will be ready for public use to cross to and from the island and enable you get to your jobs and homes with ease instead of relying on the Likoni ferry,” the President said.

At the same time, the President cautioned Kenyans against insincere politicians who continue to mislead and needlessly incite the public on the operations of Mombasa Port and the Standard Gauge Railway (SGR).

President Kenyatta pointed out that contrary to the lies peddled by some politicians, the modern railway service and expansion of the seaport had created more business for ancillary service providers such as cargo truckers who evacuate over 70 percent of the port's output which had grown significantly in recent years.

“When we started expanding the port, there were close to 20 million containers that had piled up. Expansion of the port has increased the number of containers and all these cannot be transported using the SGR. Trucks are also transporting their cargo everyday.

“Lets not be people who are inciting Kenyans for selfish political motives,” President Kenyatta cautioned.

The President highlighted several infrastructure projects lined for the Coast region in coming months among them a trans-national highway from Malindi through Dongo Kundu to Lunga Lunga and ends in Bagamoyo in Tanzania to link the people of the two countries. 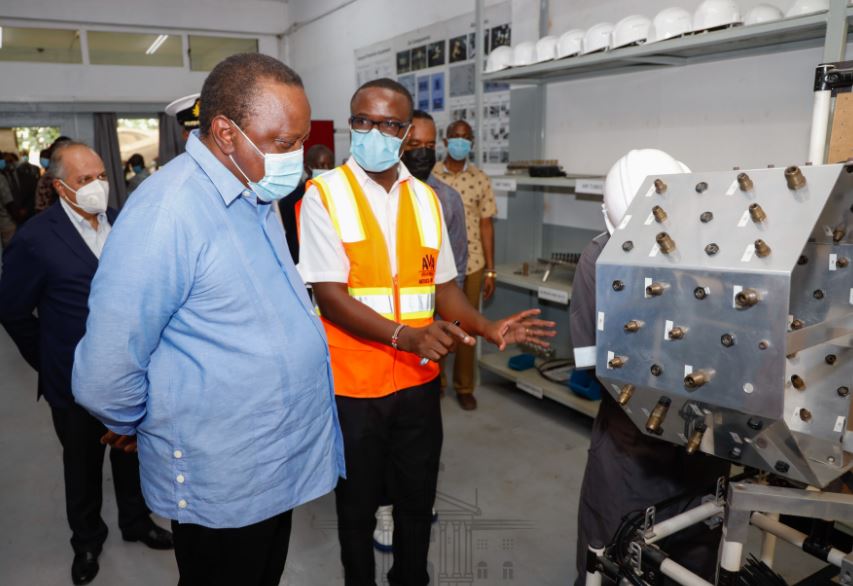 Prev2 of 20Next
Loading...
NMS Is Offering Free Medical Services In These Nairobi Estates < Previous
Machakos Senator Boniface Kabaka is Dead Next >
Recommended stories you may like: