President Uhuru Kenyatta has advised the Kenya Defence Forces (KDF) to invest more in continuous training so as to be better prepared to deal with emerging security threats.

The President, who was accompanied by First Lady Margaret Kenyatta, emphasized that the training must focus on imparting skills that will prepare the military to respond to diverse challenges from both conventional and asymmetric spheres.

“To effectively contain the security challenges of the 21st Century, training within the military must be better aligned with emerging threats across all domains and the expanded demands placed on the shoulders of our forces,” the President said.

President Kenyatta spoke Thursday at the Kenya Military Academy in Lanet, Nakuru County, where he commissioned the eighth group of military cadets that has undergone a three-year training under the Bachelor of Science in Military and Security Studies program.

The cadets, who started the degree program offered by Kenyatta University in collaboration with the Ministry of Defence in 2017, will be graduating next month.

Addressing the graduating officer cadets, President Kenyatta said they should use the professional knowledge, skills and competencies they have acquired to serve and protect the sovereignty of the nation, its people and region.

“It is important to underscore that learning to acquire knowledge, and to sharpen your skills and competencies shall be a daily endeavour throughout the entire course of your career in uniform,” President Kenyatta said.

He congratulated the new officers and advised them to ensure their commitment to hard work, diligence and excellence does not diminish throughout their career.

“We expect a lot from you, but our expectations are not more than you can deliver; we also urge you to always abide by the tenets of the Officer’s Creed, and to never let the high standards of professionalism, valour and commitment to duty that have been set by your predecessors diminish by even one iota,” the President said. 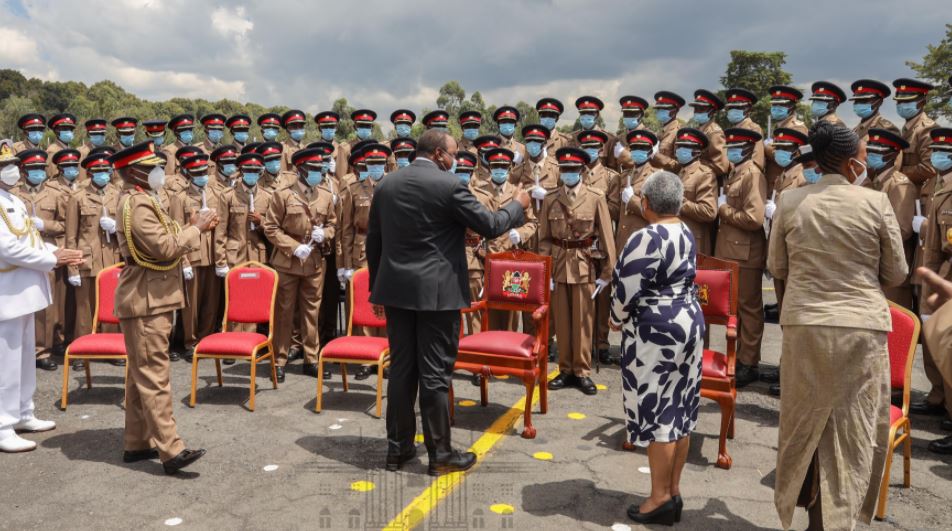 Noting that the commissioned officers included cadets from Rwanda, Tanzania, and Uganda, President Kenyatta said the first-class training they have acquired from the military training institution should help to enhance security cooperation in the region.

“Most significantly, I am confident that the friendships established amongst you will contribute to the strengthening of our national ties and our collective responses to the security challenges that we continue to face in our region,” the President said.

Denis Melita Nanyukoko took the award for the best cadet in professional studies while David Paul Gitonga emerged second in the category.

The award for the best officer cadet in character development was won by Paul Odhiambo Olwal while the second position went to Endrico Lopua Elimlim.

Also present were Inspector General of Police Hilary Mutyambai and Commandant of the Kenya Military Academy Major General Peter Njiru among other national and military leaders.

Nairobi Minority Leader Tables Sonko Impeachment Notice < Previous
Man Who Died By Suicide Buried In His Living Room Next >
Recommended stories you may like: