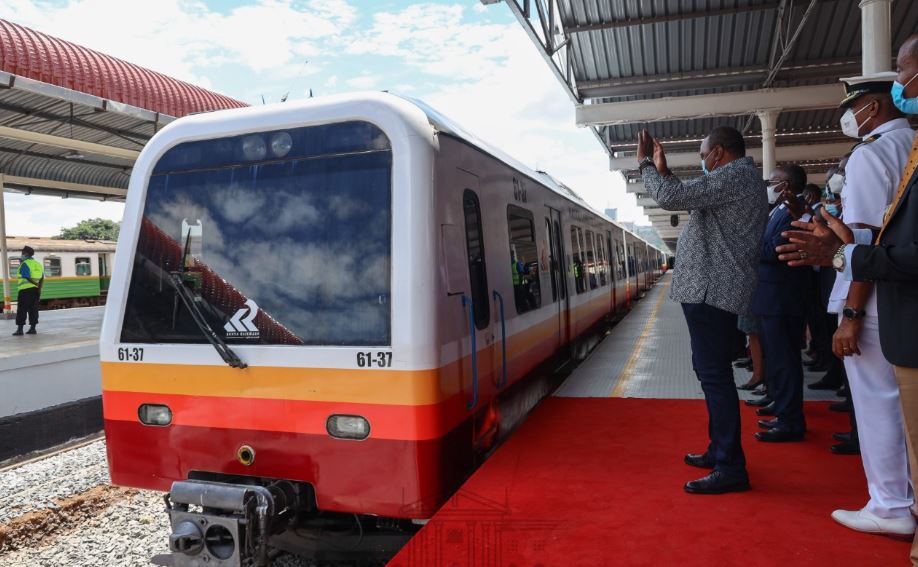 The Nairobi Central Railway Station as well as the 10 stations were refurbished under the modernization program of the Nairobi Commuter Rail Service.

“These stations will also soon be served by 11 DMUs, of which five are being commissioned today,” President Kenyatta said.

The new commuter rail network, which will have day-long hourly train service to and from the 10 stations, will also be integrated with a Bus Rapid Transit (BRT) system that will connect the Nairobi Central Station with existing matatu and commuter bus termini.

The President said the Government is focused in its implementation of integrated transport network projects in Nairobi to curb the huge losses Kenyans face as a result of traffic congestion.

Uhuru said the Government has so far spent Kshs 6.6 billion in upgrading the commuter rail stations within the Nairobi Metropolitan region, including the access roads as well as the integrated and modern ticketing system that accommodates offsite booking.

“But we are comforted by the fact that these investments have already yielded great fruits.  During the construction of these 10 commuter rail stations, we had an average of 50 workers per day engaged, culminating in over 180,000 direct jobs created and over 700,000 indirect jobs,” the President said.

President Kenyatta pointed out that the maintenance and upkeep of the stations was and will continue to be undertaken by the Kazi Mtaani youth.

He disclosed that in the next one year the scheduled commuter rail service will be extended to Jomo Kenyatta International Airport, allowing airtravellers an alternative mode of transport to and from the airport without suffering the frustration of being caught up in the Mombasa Road traffic jam.

“While this extension is being constructed, high capacity buses will be stationed at Embakasi Village Station to provide direct transport services to and from the Jomo Kenyatta International Airport,” he said.

The President said by investing in an integrated transport network in cities and growing urban areas, the Government is giving citizens affordable and accessible pathways to conduct their business and social activities.

“We are also creating additional pathways for employment and economic development.

“In addition, since the completion of these projects, we have seen the revival of townships that had endured decades of reduced economic activity,” President Kenyatta said.

He noted that the current over-reliance on road transport has  had negative impact on the environment, saying improving urban transport and mobility in Kenyan cities has economic as well as environmental conservation benefits.

“Therefore, by diversifying our urban transport solutions and giving commuters the option of faster and cheaper travel by rail, we will reduce the number of motor vehicle trips; and thereby save Kenyans not only time and money but also enhance air quality in our Kenyan urban areas,” President Kenyatta said.

Transport CS James Macharia said the launch of the Diesel Multiple Units is a major milestone in urban transport in the country and thanked President Kenyatta for his leadership that has facilitated the transformation of the transport sector.

Scroll below for the photos. 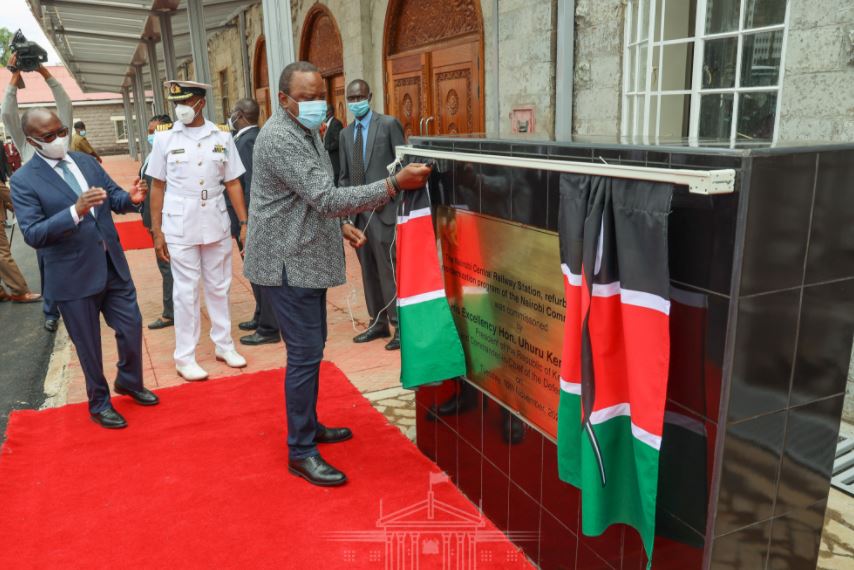 Prev1 of 21Next
Use your ← → (arrow) keys to browse
Sarah Wairimu: Tob Cohen’s Murderers Colluded With Investigators To Implicate Me < Previous
The Top Stories on the Internet Today (Thursday November 12) Next >
Recommended stories you may like: