Housing and Urban Development Principal Secretary Charles Hinga has dismissed reports by a local media house that youths recruited for Kazi Mtaani programme in Uasin Gichu County were paid only Sh90 instead of the stipulated Sh450.

In a live report Wednesday morning, the media house claimed the youths demonstrated over nonpayment of their dues and alleged theft of the initiative’s funds.

But PS Hinga on Thursday refuted the reports and slammed Citizen TV over what he termed as “inaccurate reporting”.

“That was inaccurate reporting by Citizentv Kenya, they sought a headline that will capture us given our propensity for bad news,” Hinga stated ina Twitter post.

The PS was responding to ODM Communications Director Phillip Etale who raised his concerns about the reports.

“This Kazi Mtaani Programme is going to cause the govt a lot of trouble. Why would one just decide to pay the youth taking part in it Ksh. 90 and not Ksh. 400 they had been promised? Kwani lazima pesa iliwe?” Etale posed.

Hinga clarified that the first cohort worked for five days in the first-week job and was duly paid.

“Citizentvkenya is just propagating mischief & it’s very wrong since they know bad news travels fast & by the time they rectify(if they do), damage would already be done, it’s totally unethical journalism,” he wrote. 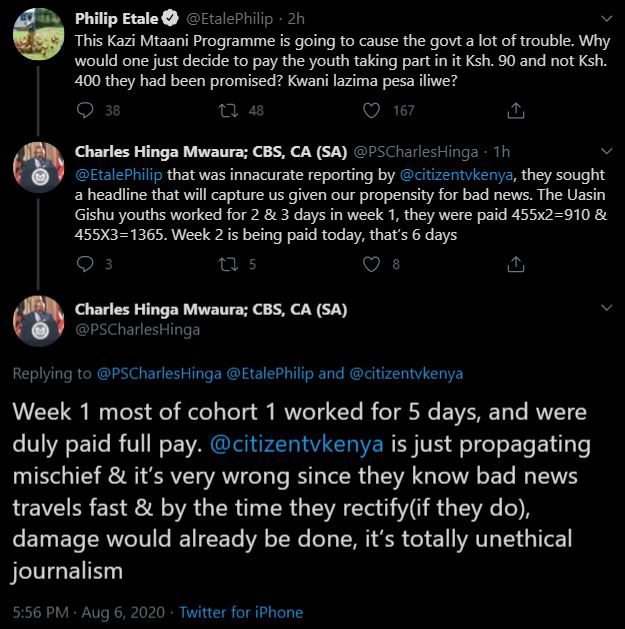 “There are those who have been opposed to the Kazi Mtaani programme since the beginning and have been using the one journalist to propagate their agenda, the same reporter is also on record claiming that the 8003 youths who were employed in the Kazi Mtaani project bribed their way in, which is not true,” said the CC.

“Today he collected some youths whom we are not even certain were in the Kazi Mtaani programme and he instigated them to do some kind of demonstration to paint the project in bad light, it’s unfortunate for a reporter in such a respected media outlet to propagate lies and unclarified information, and the claims should be dismissed with the contempt it deserves by the residents of Uasin Gishu,” added Jaldesa.

Grand Mullah Awarded Ksh750K Over Windscreen Damage To Bentley Bentayga < Previous
13 Things To Know About Fashion/Lifestle Blogger Lilmo Julliet Next >
Recommended stories you may like: