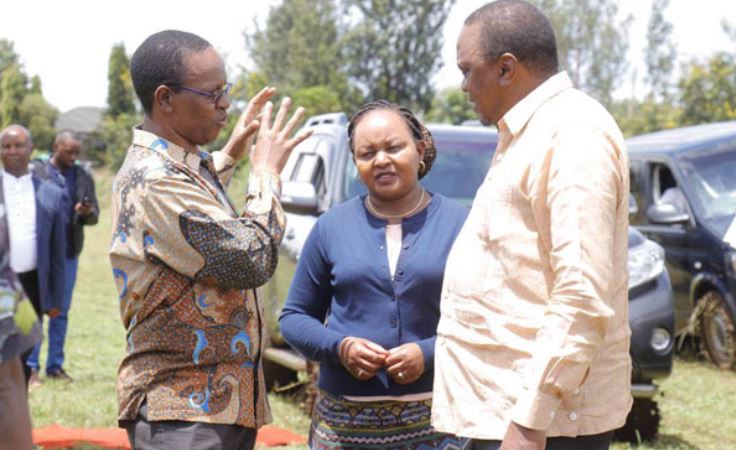 The letter was uploaded to SCRIBD on Thursday, July 23.

Dear PS,
RE: YOUR PREJUDICIAL ENGAGEMENT IN KIRINYAGA POLITICAL AFFAIRS
I have opted to write an open letter to you after it has become clear that despite ournumerous conversations, and messages through various people, in which you indicated that you were not, and would not engage in fanning political hostility in Kirinyaga,you have been the primary catalyst in the destructive politics that have become the new brand of the County. Yes, we are aware of other interested parties and those of opposing political camps that support the MCAs, but you are the primary catalyst.

I learnt with consternation that the ill-informed impeachment was carried out with your tacit support. It is on record that during the impeachment process, you variously went round the County with the Assembly members pushing the impeachment leaving no doubt as to what your political desires were. Accounts from various sources indicate that you gave your unqualified support to the impeachment, well knowing that the motion had no substance and no factual basis and would only lead to besmirching my character and poisoning the political environment in the County. Anyway, that is water under the bridge.

Since the failure of the motion, I am now very disheartened to learn that you have continued to support a heavily funded and well-orchestrated scheme to destabilize the County.

In the most recent occurrence, you digitally took part in a meeting with over 20 MCAs who have ganged up and sworn to make Kirinyaga ungovernable. I have confirmed with MCAs who were present that in the course of the meeting, the Assembly Majority Leader put you on speakerphone and in the conversation you beseeched them to stay together and asked them not to split because it was just a matter of time before you and the Kirinyaga Senator took over the reins of BBI in Kirinyaga and in the region.

You indicated in the conversation that you must be seen to be the one “delivering them to the Handshake” and not the Governor, that I was the only one standing in your way. You asked them to maintain the pressure on the county government so as to achieve your objective. For their support, you committed to ensure that they each got funding for a borehole from the national government a promise you are already delivering. You also promised them they would each get a rural road allocated under the KERRA programme.

I, therefore, address you in this form to put it on record that we know of your machinations and inform you that these machinations are destroying our County. We know that your public pronouncements on non-interference are a ploy calculated to deceive the country while you invest in fomenting problems in Kirinyaga. It is no wonder that all attempts at peace making by different parties have borne no fruit.

We have been unable to build consensus; every time we take one step forward, we have immediately gone ten steps backwards. We can’t negotiate a peace deal or reach consensus on any issues including the budget because you have continued to heavily support the stalemate. My staff remain harangued and harassed and are unable to meaningfully carry out their responsibilities of serving the people.

Development conscious MCAs who support me have been fired from Committees, suspended from the assembly, and are the subject of continual hounding. This is just so we remain in unending conflict and impasse, and to ensure I have no support at the assembly. The County is slowly grinding to a halt.

PS, I wish to remind you that as the County grounds to a halt due to the MCAs intransigence supported by you, it is the people of Kirinyaga, not the leaders, who will pay a price. When we are unable to complete and equip the Kerugoya Level 5 Hospital, when we are unable to pay health workers or buy medicine, hospital beds and ventilators, it is Kirinyaga people who will suffer from Covid and other ailments, but we will not be exempted.

When we cannot complete the economic empowerment programs due to stoppage of funding, it is our people who will continue to struggle with poverty. When we cannot upgrade more markets and our remaining parkings, that even the development partners recognized for diligent completion, it is us, the Kirinyaga people who will agonize.

As for the BBI mandate, I am not aware that there is a “regional leadership”; any engagement in the process has been organic and the BBI movement needs no political jostling.  I would hope that we all support His Excellency the President in achieving his legacy desire from the Handshake without the need for political squabbling.

As I have told you in our numerous conversations, my singular focus in the remaining two years of my term is to serve the people of Kirinyaga diligently. I took office with a promise that I intend to deliver. I want to leave Kirinyaga rising. I want the people to know it is possible for leadership to make a difference, even without shouting from the rooftops. Your continued machinations make it impossible to achieve these objectives.

Finally, PS, I plead with you to kindly reconsider your focus and join me and other leaders in ensuring that Kirinyaga reaches its potential. We owe it to the people on whose behalf we have been given the privilege of leadership.

Loading...
Only In Kenya: Why Embu County Commissioner Wants Wives To Dress in School Uniform < Previous
All The Trending Images This Friday Next >
Recommended stories you may like: