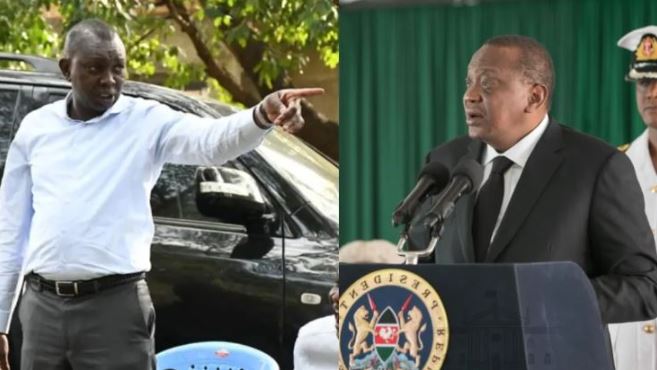 Kapsaret MP Oscar Sudi has sensationally pleaded with President Uhuru Kenyatta to spare William Ruto’s life in his bid to crush the DP’s presidential ambition in 2022.

Speaking at a media briefing in Eldoret, the outspoken MP alleged that the State is targeting DP Ruto’s assets as well as those of his allies.

“You have pushed DP Ruto to the wall in so many ways but now I am pleading with President Kenyatta that please do everything you want but spare his life and that of his family,” Sudi said.

“We know you have forcefully taken the Ruai land from Ruto. He has two houses in Nairobi which you can also take. You can even take his home in Sugoi and all his businesses but we plead that you spare his life,” he added.

According to the legislator, DP Ruto and his allies worked hard for Uhuru but the President is treating his deputy like trash.

“Those frustrating Kenyans should not think they are above God and will live forever. If they are lucky they will only live for a maximum of 115 years,” Sudi said, adding that the DP has opted to remain silent amidst all kinds of intimidation and threats to his life.

At the same time, the vocal MP claimed that during the recent Jubilee parliamentary group meeting at State House,  the President threatened MPs.

“You even told us that someone had told you that you look like your father but you behave like your mother. You called us at State House and used all types of language to abuse us, including threats. We accepted that and for me, I will never go back to State House,” he said.

Sudi also alleged that the fight against coronavirus was being used politically and that is why “bars can operate but not religious places.”

“They think if they open churches then Ruto will have a platform to speak. They can continue cheating us with fake Covid-19 numbers but in the end, they will have to open even the churches,” Sudi said.

AG Kihara Slams CJ Maraga Over Attack on President Kenyatta < Previous
Grandmother’s Agony Over Sexual Assault of Deaf-Blind Granddaughter Since 2014 Next >
Recommended stories you may like: