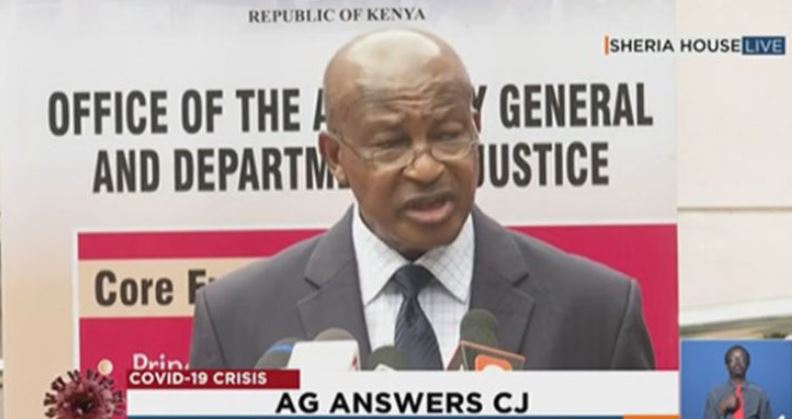 The Attorney-General (AG) Kihara Kariuki has faulted Chief Justice David Maraga over his public attack on President Uhuru Kenyatta during a press briefing on Monday.

The CJ accused the Head of State of violating court orders and refusing to appoint 41 judges proposed to him by the Judicial Service Commission. Maraga also claimed that efforts to get an audience with the President over the appointments had failed.

CJ Maraga also accused AG Kihara Kariuki of not seeking a stay of execution and only filing notices of appeal on court orders demanding that President Uhuru Kenyatta appoints the judges.

In a rejoinder, AG Kihara accused Maraga of grandstanding and playing to the gallery; he noted that the CJ’s attack on Kenyatta was shocking and personal.

The AG accused CJ Maraga of expressing extra-judicial opinions on matters that are pending before courts and that may eventually end up in the Supreme Court.

“The Chief Justice is openly commenting on merits and demerits of cases. It creates a perception that he is seeking to influence cases outcomes,” Kihara said.

He added the Executive will continue communicating with the other arms of the government through established channels of communication.

“The Executive declines to comment on the merits and demerits of the issues raised by the Honourable Chief Justice in his media briefing,” said Kihara.

“We shall respond to him directly with respect to issues which are not subject to ongoing cases. The Executive will not discuss cases before the court,” he added.

The AG also noted that President Kenyatta will not abdicate his role to appoint persons tainted with integrity issues.

“I invite the CJ to focus on reopening of courts and address the backlog, as well as address complaints on delayed cases. There is only one government, Kenyans want public service, not self-service,” he said.

“The Executive is committed to deliver on the Kenyan dream.”

The Trending Images This Wednesday < Previous
Take Ruto’s Assets But Spare his Life, Oscar Sudi Pleads With President Kenyatta Next >
Recommended stories you may like: