Renowned FGM ‘Hype Man’ Calls it a Day, Hands Over Regalia to Govt in Mock Ceremony 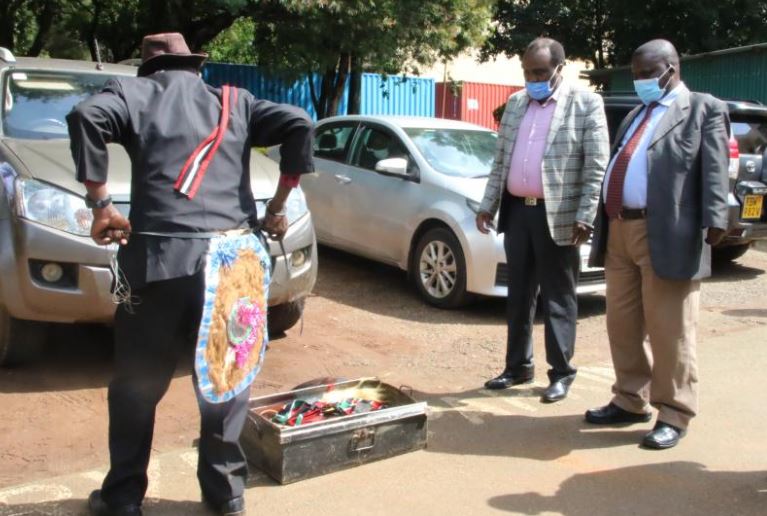 A long-serving Female Genital Mutilation (FGM) ritualist in the Rift Valley region has been forced to quit his trade after the State outlawed the practice, rendering his job as a “hypeman” redundant.

Chelele was highly regarded as a ‘morale builder’ for new initiates and legend has it that any FGM ritual without him would be unsuccessful since the initiates would not attract high profile men to marry.

His services were highly sought after, making Chelele a prized FGM ritualist who would travel far and wide to the Kalenjin sub-tribes to entertain and embelish the initiates.

On Tuesday, Chelele put on his last show at the Uasin Gishu County headquarters to mark the end of his “career”. He donned the attire and instruments he used to decorate the initiates with and performed a mock ceremony of how he conducted the rituals.

He also surrendered his prized tools of trade to the Uasin Gishu County government as he lamented ‘diminished business prospects’.

“At the moment, FGM has been outlawed in the country and no one is still interested in my services. That is why I have decided to surrender the traditional ornaments and other relics to be showcased in their museum,” he said as quoted by Standard. 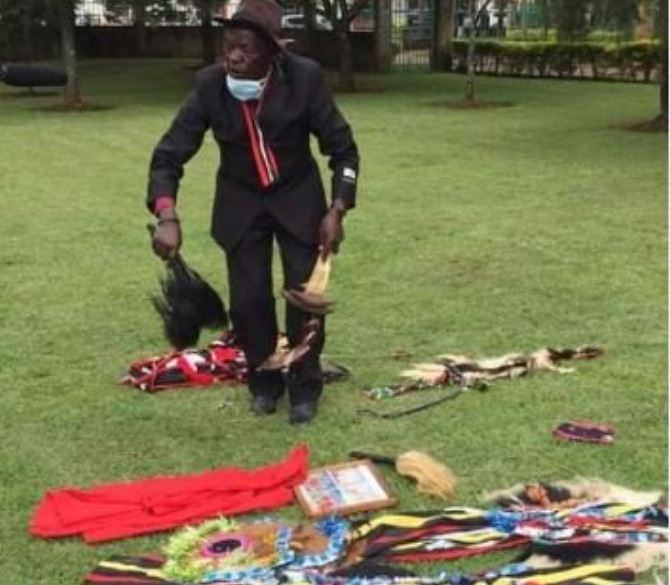 He said he has travelled to many places performing songs and dances to praise the initiates, in turn bringing the best suitors to them.

“Men who were seeking girls to marry always thronged the initiations ceremonies because they knew they would get the best wives,” he said.

Chelele said he would embellish the FGM initiatives with an array of beads for the neck, hands and legs as well on the necks.

“After FGM was outlawed, I turned to changa’a brewing to sustain myself and as fate would have it, I was arrested after I was found to be in possession of the illicit liquor,” he said.

Following his arrest, Chelele was taken to Kaplelach quarantine facility for defying Covid-19 measures. It is while in quarantine that Chelele embraced the salvation of Jesus Christ and turned over a new leaf.

Speaking after receiving the artifacts, Uasin Gishu Deputy Governor Daniel Chemno said they shall be handed over to the Department of Culture and Social Services.

Mr Chamno added that Chelele will be enlisted as one of the county’s anti- FGM and anti- illicit brew campaigners. He urged those yet to reform to do so before the law catches up with them.

Interview With Engineer Antony Ng’ang’a Mwaura < Previous
Ezekiel Mutua: Dirty Kamba Music to Blame for Teenage Pregnancies in Machakos Next >
Recommended stories you may like: