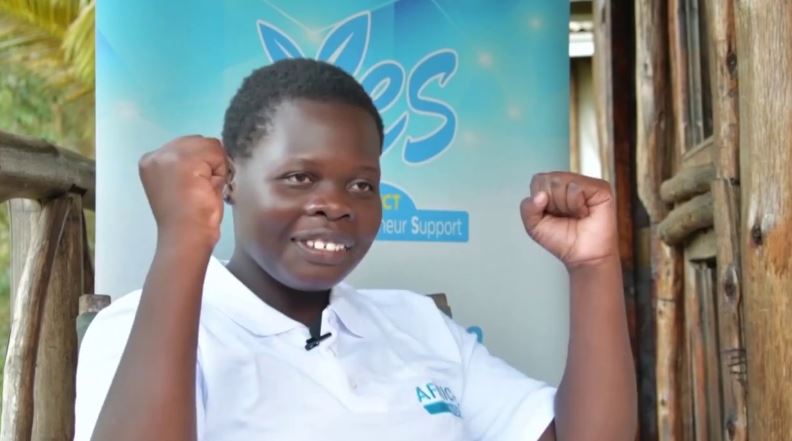 Elizabeth Okullow, 24, is a hydroponic farmer and the CEO and co-founder of Lafamia Greens, a social venture that uses hydroponic (soilless) and greenhouse technology to produce organic vegetables.

Okullow is also a beneficiary of KCB 2jiajiri program and a fellow of Africa Young Entrepreneur Support (YES).

She talked to Nation.co.ke about her journey.

What inspired you to venture into Agripreneurship?

During those hard times when I was still mourning my loss, I read a book titled The Power of Your Subconscious Mind by Joseph Murphy.

When I read it, I was inspired and realised that I could create a better world for myself. I used to spend most of my time hanging around trees. One day it hit me that I had a ‘thing’ for plants when I was collecting aloe Vera and some local herbs in the bushes.

My mum is a Forester so I wasn’t keen with my discovery. Also, growing up, I spent most of my time looking for indigenous plants in sugarcane plantation, jumping up and down in trees or helping at the farm.

That day I went home and started researching Agricultural opportunities in Kenya. Days later I landed into an agribusiness idea of strawberry and made a plan.

I attended networking events in Nairobi in the hope of getting someone to help me. I made some connections and pitched but I never got any help. I didn’t succeed and left the strawberry project. But I learned that I was so much more interested in becoming an entrepreneur than a microbiologist.

What is your experience with employment?

Interestingly, I was not actively applying for jobs. I was looking for business opportunities. I wanted to become an entrepreneur. At some point, I had to join an entrepreneurship program by Sinapsis which I was required to pay Sh36,000.

I had no job, no financial support so I quit but my dream didn’t die. I tried working on a waste management idea which I asked for a politician to support me and he left me stranded.

My first job after an internship was in an organization, Balloon Ventures where I got an opportunity to work with entrepreneurs. My dream of becoming an entrepreneur was revived then!

Fast forward, a year later, four months into unemployment and living in Nairobi, I saw a message on a WhatsApp group asking those who are interested in hydroponic farming to attend an interview the following morning. It was on a Sunday night and the interview was scheduled on a Monday morning. On seeing the message, two things came into my mind: I’ll become an entrepreneur after training and I’ll get involved in agriculture! I never hesitated. Luckily I had heard about hydroponic farming from my Food Microbiology lecturer; he had told us that some people produce food without soil, I didn’t believe it then.

Getting into the training in August 2018 was the beginning of my agripreneurship journey. Before starting Uzali Farm that year, I used to sell fruits to get by. We officially started our farm operations in 2019.

The journey hasn’t been easy. My parents expected me to get a formal job. Until today, my dad is still in denial that I chose this path. My mom has been very supportive since she is a farmer too.

When we started Uzali Farm, we were still employed or having different hustles. In September 2019, all my team members decided to quit. They gave up on the business. I was stranded.

Here, I wanted to continue working for someone to get money to survive with. On the other hand, I had a business which was dying before implementation. I had to make a choice.

I consulted with friends. I analysed the whole situation and wrote down the pros and cons of each decision. After hours of analysis, I decided to quit my job and focus on building my business.

I had nothing. I had no money to survive with. But I just quit!

I called a meeting to understand why my business partners were leaving the business. Each gave me their reasons and luckily, one remained with me. I learned the importance of getting the right people in my team who share the same vision and can stick no matter what.

Being a farmer, we encountered pests and diseases. We were attacked by bacterial wilt which led to low yields. Farming requires a lot of patience and perseverance. Agribusiness is not a get rich quick scheme.

How is it like being a young woman in agriculture?

When I tell people that I am a farmer, they don’t believe me. There was a day someone told me he thought I was just an online farmer – I just talk and don’t do it. I had to send him a video to show him that I am a farmer.

I have been criticised, too. I was once told to get valuable experience from employment first. Some say I am more of a corporate lady than a farmer.

Also, I deal with negative attitudes towards farming almost every day especially amongst youths.

What’s the future like for Agriculture and your enterprise?

Agriculture has a great potential in transforming our society. We can become a food secure country.

Through consistent food production using hydroponics we intend to: feed 1 million people in Kenya by producing food throughout the year; create 5,000 jobs in the next 5 years by training young people on hydroponic technology both offline and online through practical demonstration and guidance; and ensure that 100 agribusinesses are started in different communities. We aim to create affordable hydroponic systems to increase food production.

Peponi School Alumnus Recalls her Experience With Racism at Kenyatta-Owned Learning Institution < Previous
Tanasha: Diamond Wanted to Be Paid to Appear at My EP Launch Next >
Recommended stories you may like: