Waiguru: “Only The People of Kirinyaga Can Remove Me From Office” 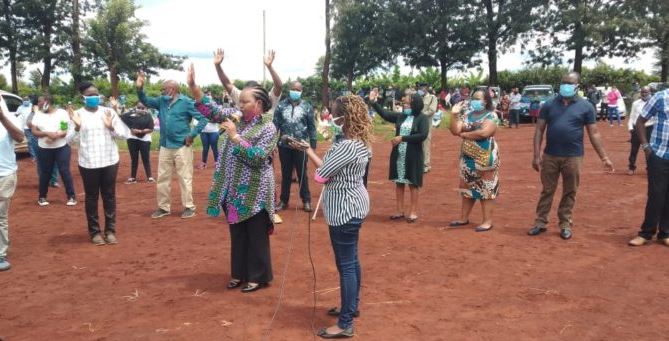 Kirinyaga Governor Anne Waiguru has maintained that she won’t be intimated by MCAs who are seeking to kick her out of office.

Speaking Thursday, Waiguru told off the ward reps saying that she is too strong and powerful to be brought down.

She rubbished the MCAs’ impeachment motion against her as a waste of time.

“I want to declare that I’m m not easily intimidated. I’ll continue discharging my duties without pressure from anyone because I know that only the people of Kirinyaga can remove me from office,” the first-time governor said.

The former Devolution and Planning Cabinet Secretary further stated that she is one of the most powerful women in the country and no one will succeed in any attempt to eject her from office.

At the same time, the county boss pleaded with Kirinyaga residents to pray for her since her enemies are powerful individuals.

“Please, I urge you to support me and talk to the MCAs who want to sabotage my work by erecting roadblocks in order to paint me as a failure,” she said.

Waiguru was speaking at Kiaumbui Primary School in Njukiini Ward, Gichugu Constituency where she issued food donations to over 600 needy people.

Where Your Customers Will Find You in the New Wave That’s About to Become a New Reality for Businesses < Previous
I Should Have Waited to Get Married, Says Betty Kyallo Next >
Recommended stories you may like: