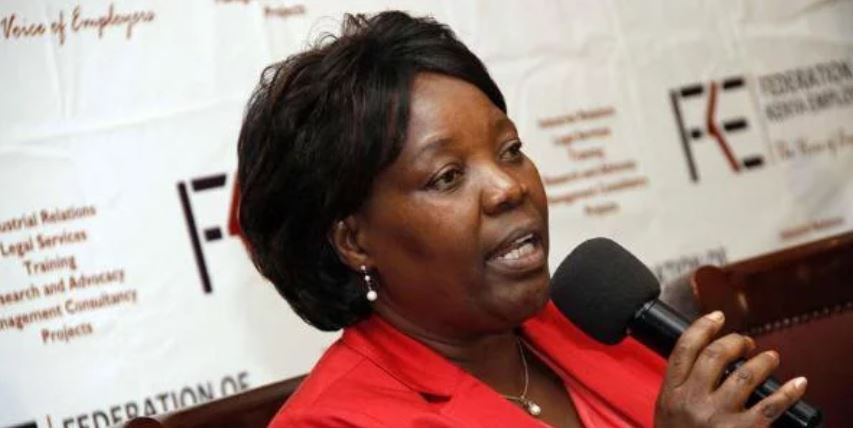 1 Even with the low employment figures in Kenya, companies are still retrenching employees. How bad is our country’s economy that employers have made retrenchment almost an annual ritual to cut costs? Is retrenchment the answer to this state of affairs? Jude Kombe, Mombasa

The economic situation in Kenya is not conducive. Retrenchment is ideally not the way forward but the tax operating environment is generally not favourable to business and quite a number have been faced with the option of either cutting costs or shutting down. This means the companies have to make the most economically feasible decision to cut cost. Unfortunately, it is never always a good decision on the part of employees and companies take it as a last resort.

2 Employers are as diverse as the people they employ. How much is the federation doing to compel employers to embrace the physically challenged and help them get into the job market? Shem Onderi, Kisii

Through our EYA (Employee of the Year Awards), we have a category for inclusivity and diversity, where we emphasise on inclusion in terms of age, gender, disability, ethnicity, and so on. FKE carries out training on how best to accommodate persons with disabilities and occupational safety and health (OSH) at the workplace. When reviewing members’ HR policies, FKE gives recommendations on the importance of best labour practices, which include accommodating people living with disabilities.

3 It is said ‘a healthy nation is a wealthy nation’. Your federation members are both employers and wealth generators. It is in the public domain that all is not well at the National Hospital Insurance Fund (NHIF), which is supposed to secure workers’ health. Stakeholders are now out there with lots of proposals on how to rescue this public health insurer. The Central Organisation of Trade Unions (Cotu) has called for the exclusion of voluntary contributors in the system as a way out. As a major stakeholder, how can NHIF be rescued before its imminent collapse? Komen Moris, Eldoret

A thorough transparent audit of its accounts and identifying the loopholes through which money is getting lost and bringing the culprits to justice is required. Also, restructuring the overall current administration; that way, anyone participating in the destruction will not be included in the new secretariat and board.

4 Labour Day is fast approaching and soon we are going to hear lots of counter-arguments on the annual ritual of minimum wages. They normally say figures don’t lie and so we, as ordinary citizens, wonder why the arguments about the whole issue. What are the major considerations before the minimum wage figure is arrived at? Is it possible to have a consensus on this issue among all stakeholders, including government? Do you think you are misunderstood any time you oppose the proposals? Komen Moris, Eldoret

It is possible to have a consensus where social dialogue is included among all the stakeholders. As a federation, social dialogue with stakeholders is prioritised. We are very much pro-dialogue because we want to have industrial harmony for businesses to thrive.

There is a misunderstanding that employers are against workers. However, that is not the case because employers also suffer from a bad economic environment, which punishes both employers and workers.

5 Employers have complained that hiring fresh graduates is a costly burden, blaming skills mismatch. What are you doing to address the sorry state of affairs in the country’s job market? Raphael Obonyo, Nairobi

We are partnering with stakeholders and industry players, for example, the National Industrial Training Authority (Nita), to try and identify the gaps that exist. Social partners like Nita, training institutions and FKE give input in the curriculum. FKE has also launched a skills mismatch survey.

6 What is a fair wage for a housekeeper working in the Nairobi suburbs? Githuku Mungai, Nairobi

It is dependent on the benefits given by the employer in terms of housing, food, allowances, etc. However, the minimum wage set by the government is about Sh10,954 a month.

7 Sometimes in October 2019, the governor of Central Bank faulted Kenya’s economic model as ‘dysfunctional’, saying there are very impressive macroeconomic figures like booming Gross Domestic Product (GDP), positive economic growth and single-digit inflation rates but on the ground you have skyrocketing unemployment, mass retrenchment, soaring cost of living, high taxes, prohibitive cost of doing business and despair. To what extent does FKE agree with this characterisation? Ann Njoki, Limuru

There is growth but not inclusive growth. In terms of unemployment, the economy does not support job creation. Look at taxes, even when making profits, taxes are too high. The regulatory framework is also too rigid and it becomes difficult for the economy to adapt to the rapidly changing global economy. There is an influx of cheap imports in the Kenyan market; most start-ups don’t grow due to stiff competition from imports.

There are inadequate legislative policies that would ideally cushion local industries. There is high importation of comparatively cheap goods which don’t compare with locally manufactured goods. Kenyan goods tend to be highly-priced because of high cost of production compared to imported goods.

At the macro level, the figures are very good but there is no incorporation of all players into the economy and thus economic growth is not felt by ordinary citizens.

8 Over time, the traditional models of employing staff on permanent and pensionable terms are being eliminated and this leaves employees in a precarious situation as there is little job security. As an employee, one works as he looks for the next job elsewhere. Don’t you think this could impact on one’s productivity if the mind is not settled because some contract is about to expire? Festus Mbaja, Nairobi

Short-term contracting enhances productivity because people are given extended contracts on the basis of their performance. Having this as a quality control strategy enhances productivity because workers will strive to deliver. Due to the uncertainty of the economic environment in the country and the susceptibility of the local economy to the global macroeconomic environment, companies have to plan for the foreseeable future, hence necessitating short-term contracting.

9 FKE is a member organisation that exists to defend the interests of its members. Do you also have programmes for employees which protect employee rights? Alexa Aruasa, Kajiado

There is the Decent Work Country Programme that tries to promote the best human resource practices, which seek to empower workers to be more productive. The federation also carries out a number of in-house trainings that are aimed at educating members on existing labour laws and sensitising them on the need to uphold the rights of workers as stipulated in the law.

10 Being a member organisation, how does FKE deal with errant members who blatantly flout employee rights and labour law? Alexa Aruasa, Kajiado

We have direct engagement with members through forums where members are sensitised on the importance of complying with existing labour laws through training.

We have deliberate programmes where members are sensitised on labour laws because whenever there is an industrial dispute involving our members, the federation is always an interested party so we have to ensure our members are compliant with these laws to maintain industrial harmony.

11 In an effort to circumvent the rules, some of your members hire staff on short-term contracts so that they are not forced by the labour laws to absorb them on permanent terms as is required. Once the short contract runs out, the employee is asked to sign a new one and the cycle continues while the right of the employee is trampled upon. What can FKE do to eliminate such anti-employee practices? Joe Muchina, Kamulu

It is not a circumvention of rules when employers give short-term contracts. It is in most cases determined by the needs of the organisation and a company works within its own budget parameters. These are the main determinants of the terms of contracts and it is in no way intended to circumvent the law. As employers, we do not practice anti-employee policies as this would lead to low motivation and poor productivity. We always strive to promote the best working conditions so that the workers remain motivated and productive.

All The Trending Images This Monday < Previous
Kakamega Man, 23, Breaks Into Bank, Poops in Hall Next >
Recommended stories you may like: