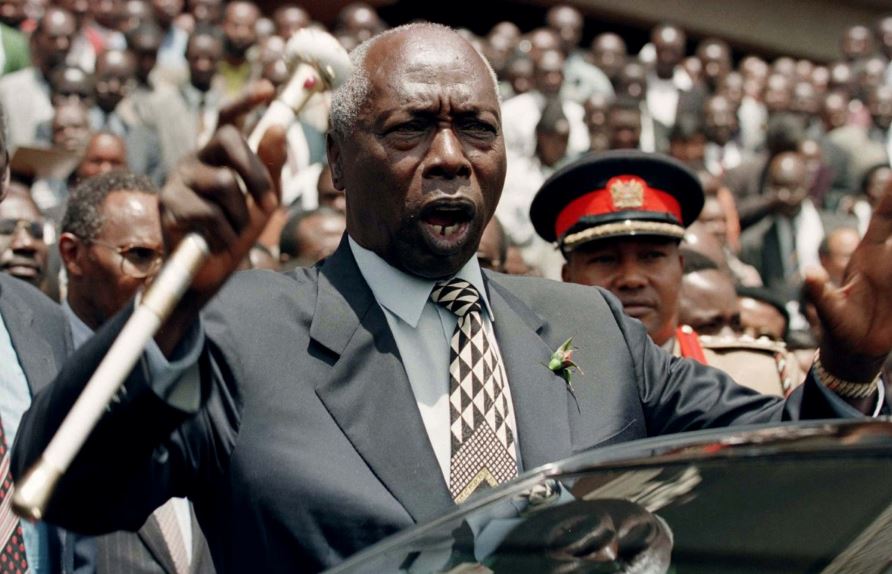 At around 5:20 am Tuesday morning, Kenya’s second president Daniel Arap Moi passed on peacefully surrounded by his family. The retired president was receiving treatment at Nairobi hospital.

Moi holds the record of the longest serving Kenyan president, and might hold that title for many decades or centuries to come. His reign lasted 24 years.

This is the first time Kenya is having to deal with the death of a former president. The first president, Jomo Kenyatta, died while in office, and thus subsequent events were lead by the military. While we await to see the procedure this time round, here is President Uhuru Kenyatta’s statement on Moi’s passing.

To the People of the Republic of Kenya, the Sons and Daughters of Africa,and the World at Large;
IT IS  with profound sadness and sorrow that I announce the passing of a Great African Statesman, H.E. Daniel Toroitich arap Moi, the Second President of the Republic of Kenya. His Excellency the Former President passed on at the Nairobi Hospital on the early morning of this 4th February, 2020 ; in the presence of his Family.

OUR NATION and our Continent were immensely blessed by the dedication and service of the Late Mzee Moi; who spent almost his entire adult life serving Kenya and Africa in a number of capacities. The Late Mzee Moi served us as an  Educator, a Teacher, a Legislator, Member of Parliament, a Cabinet Minister, the Vice-President and finally as the President of the Republic of Kenya.

UPON HIS RETIREMENT from State Office, and in keeping with these emingly boundless energy that characterized his many decades of Public Service,the Late Mzee Moi continued to serve Kenya and Africa by mentoring leaders in Kenya and beyond, continued participation in development projects and charitable works, and advocating for Peace, Love and Unity throughout Africa and the World.

AS A LEADING FIGURE in the Struggle for Kenya’s Independence, and an ardent Pan-Africanist; the Late Mzee Moi’s Legacy undoubtedly positions him as one of Africa’s Greatest, a Man who made his Nation and the Continent immeasurably better. Following the sudden death of the First President of the Republic of Kenya,the Late Mzee Jomo Kenyatta, the Late Mzee Moi stepped into apex leadership in 1978 and immediately brought calm and confidence to a Nation reeling in shock,following the unexpected death of the Head of State.

THE LATE MZEE MOI’S steady hand guided Kenya through the restoration of multi-partyism and many other challenging periods; culminating in the peaceful transfer of power in December 2002, a then rare occurrence in Africa and one which set an example that has been emulated across the Continent and beyond ever since.His Legacy endures in Kenya even to this day, encapsulated in the Nyayo Philosophy of ‘Peace, Love and Unity’ that was his mantra throughout his tenure as our Head of State and Government.

AS WE MOURN THE PASSING of an African Icon, our heartfelt condolences go out to his Children, Relatives and Close Friends. We will never forget that even as he served Kenya, Africa and the World; the Late Mzee Moi remained a  deeply committed family man, a loving Husband, Father, Grandfather and earnest Friend to so many. While they undoubtedly grieve his passing, I wish to assure them that Mzee Moi lives on in the hearts of the Millions of Kenyans who benefited from his servant-leadership, and in the peaceful, harmonious and united Kenya that was built in large part by the works of his hands.

ABOVE ALL ELSE, the Late Mzee Moi was a devoted Christian, who nevertheless championed the rights of all persons of all faiths to observe their religion without discrimination or impediment. Daniel Toroitich arap Moi ran a good race, kept the faith, and now he is enjoying his reward in heaven.

IN HONOUR OF THE LIFE AND TIMES of the Late Great Mzee Daniel Toroitich arap Moi, and on behalf of a grateful Nation forever indebted to our deceased Second President for all his many years of steadfast public service, I, UHURU KENYATTA, under the authority vested in me as the President of the Republic of Kenya and the Commander in Chief of the Kenya Defence Forces, do hereby ORDER and DIRECT: –

I. THAT in testimony of the respect in which the memory of the Late Daniel Toroitich arap Moi is held, the nation will observe a period of national mourning from today until the day of his funeral;

II. THAT the Late Daniel Toroitich arap Moi shall be accorded a State Funeral, with all appropriate Civilian and Full Military Honours being rendered and observed;

IV. THAT our national flag shall be flown at half-mast for the same length of time at all High Commissions, Embassies, Consulates, Diplomatic Offices and other facilities of the Republic of Kenya
abroad.

May the Late Mzee Daniel Toroitich arap Moi Rest in Eternal Peace.ISSUED under the HAND AND SEAL of the President, on this 4th Day of February, 2020.

President Daniel Arap Moi Dies at 95 < Previous
The Top Stories on the Internet Today (Wednesday February 5) Next >
Recommended stories you may like: